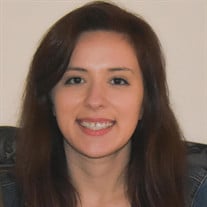 Mariah LeighAnne Murrell came bouncing into the world on July 29, 1994, in Clinton, Missouri, much to the delight of her mother, Twila (McCown) Barnes, who had always dreamed of having a daughter. From the moment Mariah crawled at six months old, she was always on the go. From gymnastics and softball in her childhood to playing football in middle school; wrestling on the boys’ team in high school; and running cross country in both middle and high school; Mariah was always involved in sports. Mariah attended school in Fulton, Missouri most of her life and graduated early through a homeschool program. After high school, Mariah relocated to the Fort Leonard Wood area with her family and became an employee of Starbucks where she first became a barista and eventually a shift leader. Mariah loved spending time with her four children: Noah, Penny, Ricky, and Gabriel. She especially enjoyed creating group Halloween costumes for them and dressing them in matching pajamas for Christmas. In her spare time, Mariah enjoyed crocheting, drawing, painting, and working out. Mariah was a citizen of the Cherokee Nation in Oklahoma and descended from the Carey, Fisher, Tadpole, Boots, Christie, Woodward, Scott, Vann, and Downing Cherokee families. Mariah passed away Monday, April 5, 2021 in a drowning accident. She was 26 years old. Though deeply missed, she will be affectionately remembered for her passion, energy, and love of life by everyone who knew her. Mariah is survived by her parents: Twila and Donald Barnes of Waynesville, MO; four children: Noah, Penny, Ricky, and Gabriel, all of Waynesville, MO; four brothers: Timothy Martin of Waynesville, MO, Joshua Curtis of Springfield, MO, Tristan Gary of St. Robert, MO, and Luke Gary of Windsor, MO; grandparents: Ben and Marie McCown of Chouteau, OK, Paul and Judy Gary of Lowery City, MO, Vickie Gary of Windsor, MO, and Kenneth and Imagene Barnes of Thayer, MO; several other relatives and friends. Donadagohvi. (“Until we meet again” in Cherokee.) Private funeral services were held under the direction of Memorial Chapels and Crematory of Waynesville / St. Robert. Burial will be held in the Sunset Memorial Estates Cemetery of Waynesville. Memorial contributions may be made in memory of Mariah Murrell and may be left at Memorial Chapels and Crematory of Waynesville / St. Robert.

Mariah LeighAnne Murrell came bouncing into the world on July 29, 1994, in Clinton, Missouri, much to the delight of her mother, Twila (McCown) Barnes, who had always dreamed of having a daughter. From the moment Mariah crawled at six... View Obituary & Service Information

The family of Mariah LeighAnne Murrell created this Life Tributes page to make it easy to share your memories.

Mariah LeighAnne Murrell came bouncing into the world on July...