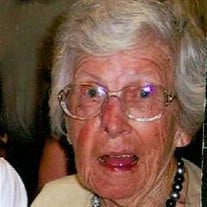 Marian Louise Nelson, daughter of the late Samuel Charles and Myrtle Edith (Parker) Ragsdale, was born March 28, 1919 in Billings, Montana. As a young girl, Marian and the family moved to California where she grew up and attended school. On March 27, 1942, Marian was united in marriage to Karl Emil Nelson in Long Beach, California. They were blessed with four children: John C., Donald J., Jim M., and Carol E Nelson. Marian was a devoted wife and mother. Her family was her life and enjoyed taking care of them. In her spare time, she enjoyed embroidery and quilting and loved to play dice and cards. Marian was very active in her community and did volunteer work. She volunteered for the Hazelgreen Fire Department, Laquey Schools in the PTA, Christian Health Care of Lebanon and Berean Baptist Church. At an early age, Marian made a profession of faith and was currently attending Berean Baptist Church. She enjoyed helping anyway that she could at the church. Marian went home to be with the Lord Sunday, July 2, 2017 in the Life Care Center of Waynesville, Missouri having attained the age of 98 years. Marian leaves to cherish her memory, her children: John (Cynthia) Nelson of Camdenton, MO, and Jim (Sonna) Nelson of Kansas City, MO and Don (Pam) Nelson of Laquey, MO; nine grandchildren: DJ (Katie) Nelson, Kindra (Nathan) White, Stephen Nelson, Christina (Paul) Winther, Jonathan Nelson, Michael Nelson, Mandi (Steve) Moore, Tiffany (Eric) Dominick, Amy Jordan and Ben Thompson; many great-grandchildren and other relatives and friends. In addition to her parents, Marian was preceded in death by her husband, Karl; and her daughter, Carol. Services were held at 11:00 a.m. Thursday, July 6, 2017 in the Berean Baptist Church of Laquey, Missouri with Pastor Chris Hendrix officiating. The songs “I’ll Fly Away”, “The Old Rugged Cross”, “Amazing Grace” and “Go Rest High on that Mountain” were played. Serving as escorts were her loving family. Inurnment followed in the Berean Cemetery of Laquey, Missouri. Services were under the direction of Memorial Chapels and Crematory of Waynesville / St. Robert. Memorial contributions may be made in memory of Marian Nelson and may be left at the funeral home.

Marian Louise Nelson, daughter of the late Samuel Charles and Myrtle Edith (Parker) Ragsdale, was born March 28, 1919 in Billings, Montana. As a young girl, Marian and the family moved to California where she grew up and attended school.... View Obituary & Service Information

The family of Marian Louise Nelson created this Life Tributes page to make it easy to share your memories.

Marian Louise Nelson, daughter of the late Samuel Charles and...