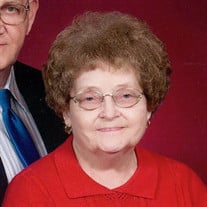 Marie E. Baranowski Henson, daughter of the late Lawrence Joseph and Lettie Ann (Gan) Baranowski, was born December 10, 1932, in Waynesville, Missouri. At an early age, Marie and her family moved to the Bloodland area and when Fort Leonard Wood was in the early stages of being built, they moved to Stoutland where she attended school. Marie met the love of her life, Charles Monroe Henson, at a movie theatre after he threw popcorn in her hair. They were united in marriage on April 8, 1950, at J.O. Brown’s home in Richland, Missouri. They shared over 61 years of marriage together and were blessed with two children: Billy and Kathy. In 1956, Marie worked in sewing for the United States government on Fort Leonard Wood and they worked at the Post Exchange. In 1957, Marie and Charles bought Dairy Queen and operated it until 1961. After selling the Dairy Queen, Marie attended University of Missouri - Rolla and received training on IBM equipment graduating on July 31, 1964. From 1964 - 1988, Marie worked as an IBM operator for Civil Service. Starting in 1988 Marie worked for ITT, a government contractor, and then became supervisor for the supply division and retired in 1994. In her spare time, Marie enjoyed crocheting doilies, and working in her flower gardens. She was a member of the Order of the Eastern Star and served as secretary for four years. Most importantly, she loved her family and treasured every moment that she could spend with them. At an early age, Marie made a profession of faith and was a member of the First Baptist Church of Richland. Marie went home to be with her Lord Monday, September 1, 2014, in the Life Care Center of Waynesville, Missouri, having attained the age of 81 years. Marie leaves to cherish her memory, two children: Billy Henson (Beth) of Mustang, OK; and Kathy Cogar (Donnie) of Waynesville, MO; eight siblings: Ruth Worley of Bolivar, MO; James Baranowski of Richland, MO; Louise Lackey of Kansas City, KS; Evelyn Barnes of Montreal, MO; Norma Avery of Stoutland, MO; Edith Hurley of Stoutland, MO; Dwight Baranowski of Stoutland, MO; and Frank Baranowski of Stoutland, MO; three grandchildren: Terry Henson, Jodi Michelle Henson and Amanda Larson; two great-grandchildren: Ethan and Shane; several nieces, nephews, other relatives and friends. In addition to her parents, Marie was preceded in death by her husband, Charles Henson (June 22, 2011); two sisters: Eunice Jones and Joan Messer; and two brothers: John and Lawrence Baranowski. Even though she is gone from our sight, she will live on in our hearts. Services were held at 1:00 p.m., Wednesday, September 3, 2014, in the Memorial Chapel of Richland with Pastor Bob Lilly officiating. The eulogy was given by Marie's son, Billy Henson. Favorite music selections included "the Old Rugged Cross" and "Heaven Came Down." Serving as escorts were Jason Larson, Danny Rogers, Adam Patterson, Larry Baranoswki, Steve Baranowski and J.R. Baranowski. Honorary escort was Terry Henson. Burial followed in the Oaklawn Cemetery of Richland, Missouri. Services were under the direction of Memorial Chapels of Richland. Memorial contributions may be made in memory of Marie Henson to the First Baptist Church of Richland Scholarship Fund and may be left at the funeral home.

Marie E. Baranowski Henson, daughter of the late Lawrence Joseph and Lettie Ann (Gan) Baranowski, was born December 10, 1932, in Waynesville, Missouri. At an early age, Marie and her family moved to the Bloodland area and when Fort Leonard... View Obituary & Service Information

The family of Marie Elizabeth Henson created this Life Tributes page to make it easy to share your memories.