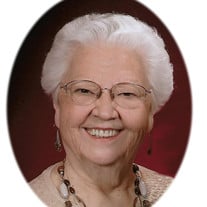 Marilyn LaVonne Coxen, daughter of Raymond and Laura (Werle) Cline, was born March 8, 1937 in Pierre, South Dakota. She departed this life Friday, October 26, 2018, in The Maples Health & Rehabilitation Center in Springfield, Missouri, at the age of eighty-one years, seven months and eighteen days. On February 15, 1958, in Mansfield, Missouri, she was united in marriage to Clyde Edward Coxen, and to this union one son and one daughter were born. Her family left South Dakota and moved to Mansfield, Missouri in her younger years. She attended and graduated from Mansfield High School in the Class of 1956. After she and Clyde were married they resided in Mansfield for a few years and then in 1962 made their home in the Hartville Community where they resided most of their lives, until moving to Springfield several years ago. In earlier years she worked for the Tobin-Hamilton Shoe Company in Mansfield, and had also been a substitute cook for the Hartville School. Marilyn centered her life around her family, caring and providing for them. Cooking meals and running her home were a main focus for her. Her world lit up when she became a Nanny, when Delaney and James entered her life. The new found love flowing from her was so exciting for her. Children were so special to Marilyn. She had provided childcare for countless families in the Hartville area. Loving and doting over each child as if they were her very own. Marilyn had professed her faith in Jesus Christ and was a member of the Hartville First Baptist Church. In earlier years she had attended the Hartville Freewill Baptist Church and Little Creek Baptist Church. She was always ready to help in the church kitchen, with CTS, and was ready to lend a helping hand to anyone in need. She was also a member of the American Legion Auxiliary of Elmer Sellers Post #45 in Hartville. She leaves to cherish her memory her son, Edward “Butch” Coxen of Springfield, Missouri; her daughter, Amy Posey of Republic, Missouri; two grandchildren, Delaney and James Posey of Republic, Missouri, a brother, Kenneth Cline of Springfield, Missouri; a number of nieces and nephews; several brothers-in-law and sisters-in-law; as well as a host of other relatives and many friends. She was preceded in death by her parents; her husband Clyde on October 30, 2016; six brothers, William, Richard, Wallace, Robert, James and Darrell Cline; and two sisters, Marcella Zaste and Toddie Tow. Marilyn was a loving and devoted wife, mother, grandmother, sister, aunt and friend. She will be greatly missed by all those who loved and knew her. We celebrate her life and accomplishments and will treasure the wonderful memories she has created for her family and many dear friends. She will live on in our hearts forever. Services were held at 11:00 a.m. Wednesday, October 31, 2018 in the Holman-Howe Funeral Home of Hartville, Missouri with Pastor Melvin Moon officiating. Robin Widner and Carol Robertson were accompanied by Jean Coy as they sang “Sheltered in the Arms of God”. The congregation sang “What a Day That Will Be” and the song “Look for Me” was played. Serving as escorts were Bruce Cline, Dale Cline, Ricky Cline, Rex Epperly and Terry Miller. Serving as honorary escorts were Delaney Posey and James Posey. Burial followed in the Coon Creek Cemetery of Hartville, Missouri. Services were under the direction of Memorial Chapels and Crematory of Waynesville / St. Robert. Memorial Contributions in memory of Marilyn Coxen may be made to Coon Creek Cemetery and may be left at the funeral home.

The family of Marilyn LaVonne Coxen created this Life Tributes page to make it easy to share your memories.