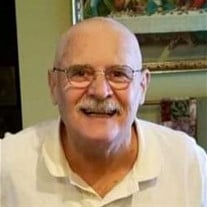 Mark Steven Cason, 70 years old, of Waynesville, Missouri, passed away at home on November 8 ,2019. Mark was born in Kansas City, Missouri on December 14, 1948, to Eleanor Repple Cason and Harold Edward Cason. He entered the US Navy on August 28, 1967 and served in the Vietnam War from July 1969 to June 1970. Mark worked numerous jobs in his life time to include being a monk for 17 years at the St, Benedict’s Abbey in Atchison, Kansas. St. Benedict’s funded Mark’s college, and he received a Master’s Degree in Theology and was a professor at the Benedictine College where he taught pottery for many years. Mark was a talented musician and enjoyed singing at the Abbey. Mark was a member of Civil Air Patrol and was active in the Ft Leonard Wood Composite Squadron. One of Mark’s greatest joys in life came from donating funds so cadets could go to activities. He also enjoyed golfing, fishing, and shopping at the BX/PX. He enjoyed sitting on the front porch smoking a Rocky Patel cigar and waving to everyone passing by. Mark was a great story teller and loved to talk to anyone that would listen. Mark is survived by a daughter Brittany Cason of Austin, Texas, brothers, Harold Cason ‘Edd” (Juanita) of Phoenix, Arizona, Jeff Cason (Wendy) of Bedford Texas, Jerry Cason of Osage Beach, Missouri, and Brett Cason (Rachel) of Kansas City, Missouri; and many other family members plus his wonderful caregivers Charline and John O’Neill: whom the family thanks you for your love and patience. Funeral Services were held at Noon, Monday, November 18, 2019 in Waynesville Memorial Chapel. Visitation was from 11:00 am until service time at 12 noon. Burial with Full Military honors followed at the Missouri State Veterans Cemetery, Fort Leonard Wood, in Waynesville. In lieu of flowers, memorial donations may be made in Mark’s memory to St. Robert Bellarmine Catholic Church or Missouri Wing Civil Air Patrol.

Mark Steven Cason, 70 years old, of Waynesville, Missouri, passed away at home on November 8 ,2019. Mark was born in Kansas City, Missouri on December 14, 1948, to Eleanor Repple Cason and Harold Edward Cason. He entered the US Navy on August... View Obituary & Service Information

The family of Mark Steven Cason created this Life Tributes page to make it easy to share your memories.