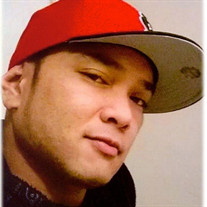 Mark Joseph Concepcion, son of the late Antonio Mafnas and Josefa Salas Concepcion, was born March 7, 1982 in Agana, Guam where he grew up and attended school. Mark “Lil Scrappy” was an avid mixed martial artist and Jin-Jitsu practitioner. Through the years, Scrappy had the opportunity to train with some of the best in the world; Tommy Barker, Enrique Watson, Renato Verissimo, Egan Inone, and BJ Penn, just to name a few. Mark made his impact in the sport of MMA gaining a record of 10 wins and 6 loses. Mark even held the 145 lb Gage of Honor Championship Title for over a year in Missouri. Traveling from Guam and throughout the U.S., Mark loved to train and show his skills and was always willing to learn and teach by sharing his experiences. In 2007, Mark came to the Waynesville, Missouri area to be close to family. Mark worked in food service and was currently working at Ichiban Japanese Steak House and Sushi Bar in St. Robert. In his spare time, he enjoyed spending time with his family and friends. He loved to hunt and fish and just enjoyed being out in nature. Mark passed away Friday, June 16, 2017 due to a swimming accident near Dixon, Missouri having attained the age of 35 years. He will be sadly missed, but fondly remembered by all those that knew and loved him. Mark was always smiling and would greet you with a huge bow. Mark leaves to cherish his memory, four siblings: Antonio Concepcion, Jr. of Guam, Grace Marie Martinez and husband Mike, Arthur Neal Concepcion of Guam and John Salas Concepcion and wife Christine of Richland, MO; niece: Valerie Sabban; nephews: John Salas Concepcion II and wife Dana; Kimo Felomino Concepcion, Aliikai Christopher Concepcion, Jerome, Evan and Benjamin Martinez and Jeremy “J.C.” Damian; great nieces: Madalyn Claire Concepcion, Keilana Concepcion and Nalani Concepcion; special friend: Brittany Adcock and Kam; other relatives and friends. Services were held at 6:00 p.m. Saturday, June 24, 2017 in the Memorial Chapels and Crematory of Waynesville / St. Robert with Pastor Chris Hendrix officiating. Music was provided by Michael Lasmarias. Memorial contributions may be made in memory of Mark Concepcion and may be left at the funeral home.

The family of Mark Joseph Concepcion created this Life Tributes page to make it easy to share your memories.