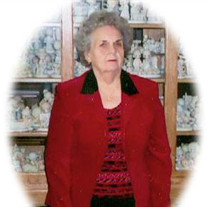 Martha Ella Cobb, daughter of the late James Leslie and Edna (Dillenbick) Lucas, was born February 22, 1923 in Detroit, Michigan. As a young girl, Martha grew up in New Lothrop, Michigan and graduated from New Lothrop High School in 1942. Shortly after graduating, Martha began working for J.L. Hudson’s in Detroit and Montgomery Wards. On March 2, 1952, Martha was united in marriage to Euyn Thomas Cobb in Ft. Monroe, Virginia. They shared over 61 years of marriage together and two children: Thomas and Karen. Martha was able to stay at home and take care of her family during her working years. Martha was an avid Precious Moments collector and had curio cabinets full of the figurines. She even enjoyed cross stitching Precious Moments projects. Martha was a member of the Ladies Auxiliary of both the Disabled American Veterans post and Veterans of Foreign Wars post. Martha loved her family and looked forward to spending time with them every chance she could. Martha passed away Friday, August 25, 2017 in the Sunset Village of the Ozarks of St. Robert, Missouri having attained the age of 94 years, 6 months and 3 days. She will be sadly missed, but fondly remembered by all those that knew and loved her. Martha leaves to cherish her memory, her loving four grandchildren: Christopher Cobb, Lana Cobb, Stephanie Cobb and Michael Aponte; one son in-law: Angel Aponte; one daughter in-law: Debra Cobb; 7 great-grandchildren: Gracie Lyn Aponte, Alex Cobb, Zoie Cobb, Eliza Cobb, Royanne Cobb, Hazel Hallman and Debra Gayle Cobb; other relatives and friends. In addition to her parents, Martha was preceded in death by her husband: Euyn Cobb (April 10, 2013); son: Thomas James Cobb (September 10, 1999); daughter: Karen L. Aponte (October 21, 2016); and two brothers: Clarence and Donald Lucas. Services were held at 2:00 p.m. Tuesday, August 29, 2017 in the Memorial Chapels and Crematory of Waynesville / St. Robert with Pastor Christopher Hendrix officiating. The songs “Amazing Grace”, “Beyond the Sunset” and “Go Rest High on that Mountain” were played. Serving as escorts were her loving family and friends. Burial followed in the Sunset Memorial Estates Cemetery of Waynesville, Missouri. Memorial contributions may be made in memory of Martha Cobb and may be left at the funeral home.

The family of Martha Ella Cobb created this Life Tributes page to make it easy to share your memories.