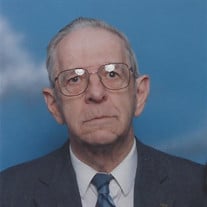 Rev. Marvin Milton Davis, son of the late Truman Eldred and Myrtie Mae (Peaslee) Davis, was born October 7, 1927 in Granton, Wisconsin where he grew up and attended school. On May 31, 1952 in Iberia, Missouri, Marvin was united in marriage to Mable Marie Miller. They just celebrated their 66th wedding anniversary. They were blessed with four children: Mildred, Maxine, Clyde and Margie. Marvin was drafted into the United States Army, two different times. The first time he was at Camp Crowder, Missouri and was discharged at the Denver Hospital. The second time, he was stationed at Fort Leonard Wood, Missouri and was also discharged there. He had earned the rank of Corporal and was awarded the Victory Medal. As a young man, Marvin answered the call to preach the Gospel. He pastored in Nevada, Boliver, Moundville, and the Iberia/Brumley area. His last church he pastored was Hopewell Baptist Church of Big Piney, where he was still a member. He retired on December 31, 1999 after pastoring Hopewell for 34 years. Marvin loved to talk about Jesus and took every opportunity to pass out Gospel tracks. In his spare time, Marvin enjoyed being outdoors while working and caring for his yard. He loved spending time with his family and he loved them deeply, especially the grandchildren. Marvin went home to be with his Lord Sunday, June 17, 2018, in the Richland Care Center of Richland, Missouri having attained the age of 90 years. He will be sadly missed, but fondly remembered by all those that knew and loved him. Marvin leaves to cherish his memory, his wife, Mable of the home; four children, Mildred Stout of Falcon, MO, Maxine Hall of Edgar Springs, MO, Clyde Davis of Waynesville, MO, and Margie Holder (John) of Bentonville, AR; six grandchildren, Steven “Gene” Stout of Lebanon, MO, Deena Stout of Falcon, MO, Michelle Foell (Bill) of Lebanon, MO, Sarah Davis of Jefferson City, MO, Nicole Holder of Bentonville, AR, and Joshua Holder (Erin) of Rogers, AR; three great-grandchildren, Morgan Daniel (Dakota), Tyler Foell, and Emilia Holder; two sisters, Patricia Kitzhaber (Bernard) of Greenwood, WI, and Ila Mae Wolf of Nekoosa, WI; a number of nieces and nephews; as well as a host of other relatives and friends. In addition to his parents, Marvin was preceded in death by one brother: Warren Davis; two sisters: Angeline Schultz and Shirley Davis; two sons-in-law: Steve Stout and Wesley Hall; and two brothers-in-law: Robert Schultz and William Wolf, Jr. Services were held at 1:00 p.m. Thursday, June 21, 2018 in the Mount Carney Christian Church near Falcon, Missouri with Rev. Phillip McGuire officiating. Marvin’s granddaughter, Nicole Holder, played “In the Sweet Bye and Bye” as a piano solo. Soloist Becky Lercher sang “Amazing Grace” and “Love Lifted Me”. Serving as escorts were John Holder, Gene Stout, Bill Foell, Joshua Holder, Dakota Daniel and Tyler Foell. Burial with flag presentation followed in the Mount Carney Cemetery. Flag presentation was provided by the Missouri Honors Team. Services were under the direction of Memorial Chapels and Crematory of Waynesville / St. Robert.

Rev. Marvin Milton Davis, son of the late Truman Eldred and Myrtie Mae (Peaslee) Davis, was born October 7, 1927 in Granton, Wisconsin where he grew up and attended school. On May 31, 1952 in Iberia, Missouri, Marvin was united in marriage... View Obituary & Service Information

The family of Rev Marvin Milton Davis created this Life Tributes page to make it easy to share your memories.