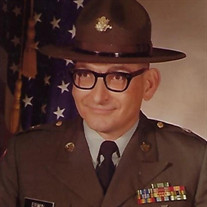 Marvin Bradley Erwin, son of the late Marvin Russell Erwin and Ruth (Monk) Erwin, was born April 6, 1948 in Wilkesville Township, Vinton County, Ohio. As a young boy, Marvin grew up in Newark, Ohio where he attended school. On August 19, 1967, Marvin was united in marriage to Perle Linda McMannis at Fort Leonard Wood, Missouri. They shared over 52 years of marriage together and were blessed with two children: Melinda and Mike. Marvin enlisted in the United States Army and served his country faithfully until his retirement after 20 years of service. He had attained the rank of Staff Sergeant and earned several awards and commendations. He served in Vietnam from 1967–1968 and as a Drill Sergeant at Fort Leonard Wood, Missouri from 1982–1985. After retiring from the military, Marvin was able to do more of the things he enjoyed like being outdoors hunting. But he especially enjoyed hunting deer. Marvin loved his family, especially his grandchildren. He loved to share stories with them and spending time with them. Marvin passed away Friday, April 24, 2020 in his home having attained the age of 72 years. He will be sadly missed, but fondly remembered by all those who knew and loved him. Marvin leaves to cherish his memory, his wife: Perle L. Erwin, of the home; two children: Melinda Ulm of Lamonte, MO and Mike Erwin (Shannon) of New Bloomfield, MO; five grandchildren: Autumn Erwin of Fulton, MO, Robert Ulm of Lamonte, MO, Michael Erwin, Jr. (Tori) of Centralia, MO, Trevor Ulm of Lamonte, MO and Amber Erwin of New Bloomfield, MO; three great grandchildren: Jacob and Anna Erwin and Gideon Ulm; one sister: Kitty Friesner of Newark, OH; one brother: Bobby Erwin (Alyce) of Newark, Oh; two special nephews: Max Erwin, Jr. and Steven Friesner; several other nieces, nephews, relatives and friends. Even though he is gone from our sight, Marvin’s memory will live on in our hearts forever. Services were held at 10:00 a.m. Thursday, May 5, 2020 in the Memorial Chapels and Crematory of Waynesville with Pastor Danny Graves officiating. The songs “Precious Memories” and “Amazing Grace” by Alan Jackson were played.

The family of SSG (Ret) Marvin Bradley Erwin created this Life Tributes page to make it easy to share your memories.