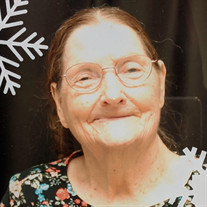 Mary Louise Lackey was born March 2, 1938, in Bloodland of Pulaski County, Missouri, to Lawrence Joseph and Lettie Ann (Gan) Baranowski., and is survived by her siblings, Norma Avery of Lebanon, MO, James Baranowski of Richland, MO, Evelyn Barnes (Francis) of Montreal, MO, Edith Hurley of Stoutland, MO, Dwight Baranowski (Vivian) of Stoutland, MO; one sister-in-law, Chris Baranowski of Stoutland, MO; numerous nieces, nephews, great nieces and great nephews, cousins, other relatives, and friends. She is preceded in death by her parents, husband Paul Lackey, four sisters: Ruth Worley, Marie Henson, Eunice Jones, and Joan Messer; three brothers: John Baranowski, Lawrence Baranowski Jr., and Frank Baranowski; sisters-in-law: Faye Baranowski, Betty Baranowski and Darlene Baranowski; brothers-in-law: Jerry Avery, Raymond Rogers, Cecil Worley, Charles Henson, George Jones, Donald Messer, and Joe Hurley. Due to the development of Fort Leonard Wood, at age four, her family moved into the Stoutland area where Mary Louise grew up and attended school. Mary Louise loved Jesus and began her walk with God as a young girl while attending High Point Baptist Church of Stoutland, MO, and was later was baptized at Sellers Creek. She was united in marriage to Paul Robert Lackey on August 20, 1960, in Stoutland, MO. They moved to Kansas City where Paul began working for Sunshine Biscuit Company. She and Paul shared a beautiful life there together, made a lifetime of precious memories before his passing on September 18, 2015. Mary Louise enjoyed cooking, and taking care of her husband, and their home. She especially enjoyed giving of her time cooking for the folks at the Care Center. In her spare time, Mary Louise crafted, sewed, gardened, embroidered, and listened to music. After Paul’s passing, Mary Louise moved to Richland where she could be closer to her family. She spent her last few years in the Richland Care Center with her little doll, Suzanne, by her side, that her loving husband had bought for her after they married. Mary Louise went home to be with her Lord on Tuesday, November 23, 2021, having attained the age of 83 while in the Care Center. Her sweet smile, and loving ways will forever be remembered by those she loved. A graveside service was held at 2:00 p.m., Friday, November 26, 2021, in the High Point Cemetery, Stoutland, Missouri, with Pastor Billy Williams officiating. Those in attendance sang the beloved hymn, “Amazing Grace.” Family and friends served as escorts. Services were under the care and direction of Memorial Chapel of Richland. Memorial contributions may be made in memory of Mary “Louise” (Baranowski) Lackey to High Point Cemetery Fund and may be left at the Memorial Chapel of Richland. Online condolences may be left at www.richlandmemorialchapel.com

The family of Mary "Louise" (Baranowski) Lackey created this Life Tributes page to make it easy to share your memories.