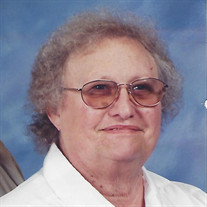 Mary Jean (Plummer) Faircloth, daughter of the late Harry Dolphus and Effie Eugenia (Smith) Plummer, was born February 28, 1932 in the St. John’s Hospital of St. Louis, Missouri. As a young girl, Jean grew up in St. Louis where she attended elementary school at Rowe School and later attended Southwest High School. During her childhood, her family made many trips on the Frisco train to visit her Grandmother Smith near Cook Station, Missouri. Jean and her family were members of the Immanuel Methodist Church in St. Louis for many years. In June 1947, Jean met a young man by the name of Cletus Herbert Faircloth. They became engaged on February 14, 1948. They eloped to Van Buren, Arkansas on March 14, 1948 and on March 15, 1948 they were united in marriage. Jean was 16 years of age. Due to rules against married students attending high school, Jean was not able to finish her high school education at Southwest High School. But years later, she earned her high school diploma with a GED and later took some college courses. On July 6, 1949, Jean and Cletus were blessed with a son, Cletus Michael Faircloth. Shortly after his birth, the family moved to Bonne Terre, Missouri where they had their second son, Dennis Wayne Faircloth on July 6, 1952. While living in Bonne Terre, Jean was active in the Centenary Methodist Church and was awarded a life membership in the Wesleyan Service Guild. She also served as a den mother in the Boy Scouts of America for many years. On March 3, 1964, Jean and Cletus were blessed with their daughter Jeanne Marie Faircloth. During Marie’s growing up years, Jean served as a girl scout leader. Jean enjoyed working part time for Missouri University on outreach programs and aid to the elderly and disabled. This led to public opinion polls by the University and then to working for many of the national poll takers in a five-county area around Bonne Terre. This was a very interesting job for her, but she was unable to continue serving after moving to Viburnum, due to Cletus’ job change. In 1975, after a team of lay witnesses came to Centenary Church, Jean and Cletus joined in this work and together they were involved in 69 missions in many years following. She encouraged many people with their faith in those years. After moving to Viburnum, Jean became very active in the Emmanuel United Methodist church as a Sunday School teacher and quilter. In later years, she held the position of administrative board chairman until she had to move due to her health. The board kept her on in an honorary capacity after that. Jean’s life work was caring for others. She was always available to help people whether it was to meet their physical needs or spiritual needs. For many years at the church, Jean was in charge of the church food baskets for the needy. Many times she would make 3 trips a day to the church just to meet the needs of the community. She was also involved with the church prayer chain and would many times arrange for help, whether it was for food or other needs. All of the ministers and the congregation depended on Jean to help coordinate with any necessary arrangements. Jean was appointed to the Board of the Iron County Ambulance District where she served as Chairman for one term and as a member until moving to Waynesville. She continued to serve even after she had to be helped to make the trip to Pilot Knob and Annapolis for the meetings. Jean was the very picture of hospitality. She loved fixing meals, whether it was breakfast with her finest dishes and best linens, or a turkey pot pie, she enjoyed entertaining ministers and others in her home. Her cooking for church events often caused a request for her recipes, and even though she was willing to share her recipes with those that asked, she was not able to give them exactly the instructions they needed, but she would always say, “you just put the right amount”. Jean began to suffer with arthritis and was not able to do more than walk with a walker. Cletus was right there by her side and helped her perform all functions for some time. Jean was diagnosed with Parkinson’s Disease. After dealing with several other medical problems that could not be reversed, Jean entered the Life Care Center of Waynesville in 2018 where she remained until her passing. Jean went home to be with her Lord on Tuesday, November 10, 2020 in the Life Care Center of Waynesville, Missouri having attained the age of 88 years. She will be sadly missed, but fondly remembered by all those that knew and loved her. Jean leaves to cherish her memory, her husband: Cletus Faircloth of Waynesville, MO; three children: Mike Faircloth of Citra, FL, Dennis Faircloth (Terry) of Papillion, NE and Marie Freeman (Mike) of Waynesville, MO; four grandchildren: Michael Faircloth (Jessica) of Searcy, AR, Matthew Faircloth (Tyler) of Maumelle, AR, Molly Llewellyn (Justin) of Falcon, MO and Ivan Freeman (Tiffany) of Waynesville, MO; seven great grandchildren: Dakota, Alissa, Raylynn, Ava, Gunner, Brylee and Barrett; one sister: Velma Hawkins of St. Louis, MO; half-sister: Lucy Pearl Sloan of the State of Washington; several nieces, nephews, other relatives and friends. In addition to her parents, Jean was preceded in death by one granddaughter, Heather Faircloth. Even though she is gone from our sight, Jean’s caring and loving spirit will be in our hearts forever. Funeral services will be held at 1:00 p.m. Saturday, November 21, 2020 in the Memorial Chapels and Crematory of Waynesville / St. Robert. Private family burial will be held at a later date. Arrangements are under the direction of Memorial Chapels and Crematory of Waynesville / St. Robert. Visitation will be held from 6:00 – 8:00 p.m. Friday, November 20, 2020 in the Memorial Chapels and Crematory of Waynesville / St. Robert. Memorial contributions may be made in memory of Jean Faircloth and may be left at Memorial Chapels and Crematory of Waynesville / St. Robert.

Mary Jean (Plummer) Faircloth, daughter of the late Harry Dolphus and Effie Eugenia (Smith) Plummer, was born February 28, 1932 in the St. John&#8217;s Hospital of St. Louis, Missouri. As a young girl, Jean grew up in St. Louis where she... View Obituary & Service Information

The family of Mary Jean Faircloth created this Life Tributes page to make it easy to share your memories.