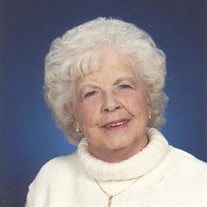 Mary Virginia Hall, daughter of Herbert H. and Viola B. (Meesey) Blatz, was born January 24, 1927, in St. Louis, Missouri. She departed this life Wednesday, March 4, 2015, in Mary Queen and Mother Care Center, in Webster Groves, Missouri, at the age of eighty-eight years, one month and ten days. She was united in marriage to William Noble Hall and to this union one daughter was born. She was preceded in death by her parents, her husband, her daughter, Marilyn L. Willey and a brother, Robert Blatz. Mary is survived by her son-in-law, John Willey of St. Louis, MO; two grandchildren, Linda Willey Becker (Tom) of St. Louis, MO and Jeffrey Willey (Courtney) of St. Louis, MO; two great-grandchildren, John Thomas Becker and Theodore Stephen Willey; her sister-in-law, Alberta Blatz; three nephews, Gary, John and Richard Blatz; a niece, Brenda Hanson; as well as a host of other relatives and friends. She was born and reared in St. Louis where she attended Gratiot Elementary and Southwest High School. She met and married Bill and they live there for thirty-five years before moving to the Lake of the Ozarks at Camdenton, MO. Throughout her life she worked as an audit clerk for Southwestern Bell Telephone Company for 35 years retiring in 1987. Mary had professed her faith in Christ and was a member of the Camdenton United Methodist Church. In her spare time she enjoyed sitting on the deck of her home and watching the boaters on the lake, fishing and being in the outdoors. She was a member of the Pioneer Club at Bell Telephone, former member of the VFW Auxiliary, Camden Senior Citizens, and was a transportation coordinator for Camden County Heart. Mary was a loving wife, mother, grandmother, great-grandmother, aunt and was a caring neighbor and friend. She will be fondly remembered and missed by all those who knew and loved her. The memories she created for her family and friends will be cherished and they will live on in our hearts forever.

The family of Mary Virginia Hall created this Life Tributes page to make it easy to share your memories.