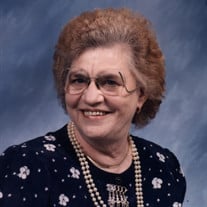 Mary “Loretta” (Manes) Harrison, daughter of the late Emerson L. and Bertha (Gibson) Manes, was born October 4, 1930 in Swedeborg, Missouri. She went home to be with her Lord on Monday, August 12, 2019 in the Sunterra Springs Care Center of Springfield, Missouri having attained the age of 88 years. Loretta grew up in Pulaski County and graduated from Richland High School with the Class of 1950. She furthered her education at Draughon’s College in Springfield to become a legal secretary. While in Springfield, Loretta worked in several law firms before coming to Fort Leonard Wood in 1954 to work. She retired in the early 1980’s. On June 30, 1956, Loretta was united in marriage to Lloyd Edwin Harrison in Richland, Missouri. They shared over 34 years of marriage together before he preceded her in death on November 16, 1990. Loretta and Lloyd were blessed with three sons, David, Stephen and Rex. After retiring from Fort Leonard Wood, Loretta was able to do more of the things she loved. She enjoyed reading, painting and different types of artwork. She enjoyed traveling on vacations and loved to visit with family and friends. Loretta had made a profession of faith at an early age and was a member at First Baptist Church in Richland for many years before she began attending Hillcrest Baptist Church in Lebanon. She was a willing worker before her health began to decline and she always loved to help with the children during Vacation Bible School. Loretta loved her family dearly and she will be deeply missed by all those who knew and loved her. She leaves to cherish her memory three sons: David Harrison of Stoutland, MO, Stephen Harrison (Marilyn) of Richland, MO and Rex Harrison (Dawn) of Richland, MO; four grandchildren, Kyle Harrison of St. Robert, MO, Mallory Jennings (Clayton) of Stoutland, MO, Heather Harrison of Springfield, MO and Amanda Harrison of Richland, MO; two sisters, Louise York (Ken) and Doris Jean Baker all of Richland, MO; several nieces, nephews, other relatives and friends. In addition to her parents and husband, Loretta was preceded in death by one brother-in-law: Jimmy Baker. Services were held at 11:00 a.m. Monday, August 12, 2019 in the Memorial Chapel of Richland, Richland, Missouri with Pastor David Brown officiating. Pianist, Marleen Brown accompanied soloist, Becky Lercher as she sang “Amazing Grace,” “The Old Rugged Cross” and “In the Garden.” Family and friends served as escorts. Burial followed in the Oaklawn Cemetery of Richland, Missouri. Services were under the care and direction of Memorial Chapel of Richland. Memorial contributions may be made in memory of Mary “Loretta” Harrison and may be left at the Memorial Chapel of Richland funeral home.

The family of Mary "Loretta" Harrison created this Life Tributes page to make it easy to share your memories.