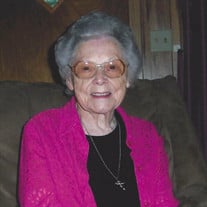 Mary Elizabeth Jarboe, daughter of Bernard and Margaret (Connelly) Dufficy, was born May 10, 1922, in Castlereu, Ireland. She departed this life Friday, August 15, 2014, in Osage Beach Rehabilitation and Health Care Center, at the age of ninety-two year, three months and five days. On April24, 1954, she was united in marriage to Paul P. Jarboe, and to this union three sons were born. She was preceded in death by her parent; her husband; and a brother, Pat Dufficy. Mary is survived by her three sons; Charles Jarboe (Linda), of Crocker, MO, Paul Jarboe (Tracy), of Crocker, MO, and Terrance Jarboe (Janet), of Crocker, MO; two grandchildren, Ryan and Holly Jarboe; three great-grandchildren, Ryan, Daphanie, and Loren; three brothers, Jim Dufficy of Auckland, New Zealand, Bill Dufficy of Birmingham, England, and Frank Dufficy of Melbourne, Australia; four sisters, Kitty Wynne of London, England, Ann Mulryan , Peggy Dufficy and Melito Newman, all of Manchester, England; and number of nieces and nephews; as well as a host of other relatives and friends. She was born in Ireland and in her teenage years the family moved to England. It was there where she met and married her husband. Paul later joined the military and began their military life journey. After being stationed at Fort Leonard Wood throughout the years, the couple retired here in 1964, and resided in the Crocker, area. Mary was a devoted wife and mother. She loved caring for her family and her home. She was a member of the Catholic Faith and attended St. Cornelius Catholic Church in Crocker. We celebrate Mary’s life and her accomplishments and will cherish the memories she created for her family and friends. She will be fondly remembered and greatly missed by all those who knew and loved her. She will live on in our hearts forever. Funeral services were held at 11:00 a.m. Monday, August 18, 2014 in the Memorial Chapels and Crematory of Waynesville with Father Henry Ussher officiating. The song “Amazing Grace” was played. Serving as escorts were family and friends. Burial followed in the Sunset Memorial Estates Cemetery of Waynesville. Services were under the direction of Memorial Chapels and Crematory of Waynesville / St. Robert.

Mary Elizabeth Jarboe, daughter of Bernard and Margaret (Connelly) Dufficy, was born May 10, 1922, in Castlereu, Ireland. She departed this life Friday, August 15, 2014, in Osage Beach Rehabilitation and Health Care Center, at the age of ninety-two... View Obituary & Service Information

The family of Mary Elizabeth Jarboe created this Life Tributes page to make it easy to share your memories.