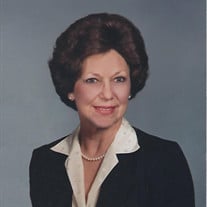 Mary Elizabeth Laughlin, daughter of the late Zeb Sliger and Dora (Caveness) Sliger, was born June 1, 1927 in Licking Missouri where she grew up and graduated from high school. Mary went on to further her education and earned her Teacher’s Certificate from Southwest Missouri State in Springfield, Missouri. Mary worked as a waitress on Fort Leonard Wood at the Officer’s Club and while there she met a young man by the name of Jim Lee Laughlin. She and Jim were united in marriage on September 10, 1956 in Waynesville, Missouri. They shared 61 years of marriage together and were blessed with one son, David, who Mary adored. After she and Jim were married, Mary became a farmer’s wife and she kept the records and books for the business. In her spare time, she enjoyed sewing and cooking for her family. She also liked to be outdoors while working in her garden, picking berries, or just at the river fishing. At an early age, Mary made a profession of faith and was a member of the Mt. Gibson Baptist Church of Waynesville. She was also a member of the Eastern Star. Mary loved her family and extended family, but she especially enjoyed spending time with her grandchildren, Savanah and Colton. She doted on them just about as much as she did her son David. Mary went home to be with her Lord Sunday, September 20, 2020 in the Life Care Center of Waynesville, Missouri having attained the age of 93 years. She will be sadly missed, but fondly remembered by all those that knew and loved her. Mary leaves to cherish her memory, her son: David Laughlin of Waynesville, MO; two grandchildren: Savanah Laughlin and Colton Laughlin, both of Waynesville, MO; several nieces, nephews, other relatives, and friends. In addition to her parents, Mary was preceded in death by her husband: Jim; and five siblings: Hope Snelson, Jessie Booker, Kathy Knutson, Vernon Sliger, and infant sister, Vernona. Even though she is gone from our sight, Mary’s memory will live on in our hearts forever. Funeral services were held at 11:00 a.m. Thursday, September 24, 2020 in the Memorial Chapels and Crematory of Waynesville / St. Robert with Pastor Richard Breeden officiating. The songs “Precious Memories”, “In the Garden” and “How Great Thou Art” were sung by Becky Lercher. Serving as escorts were Colton Laughlin, Michael Booker, Brant Booker, Donald Booker, Chuck Henderson, Matt Laughlin, Jimmy Laughlin, and Joey Laughlin. Serving as honorary escorts were David Laughlin, Leon Henderson, Pau Laughlin, and Nick Henderson. Burial followed in the Waynesville Memorial Park Cemetery of Waynesville. Memorial contributions may be made in memory of Mary Laughlin and may be left at Memorial Chapels and Crematory of Waynesville / St. Robert.

Mary Elizabeth Laughlin, daughter of the late Zeb Sliger and Dora (Caveness) Sliger, was born June 1, 1927 in Licking Missouri where she grew up and graduated from high school. Mary went on to further her education and earned her Teacher&#8217;s... View Obituary & Service Information

The family of Mary Elizabeth Laughlin created this Life Tributes page to make it easy to share your memories.

Mary Elizabeth Laughlin, daughter of the late Zeb Sliger and...