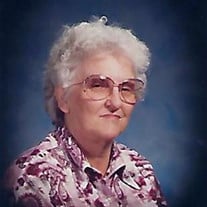 Mary L. Patton, daughter of the late Willard Anderson and Nancy Jane (Exendine) Gan, was born June 16, 1931 in Bloodland, Pulaski County, Missouri. She passed away on Monday, November 5, 2018 in the Life Care Center of Waynesville having attained the age of eighty-seven years. On November 6, 1949, Mary was united in marriage to Arthur Lawrence “Pat” Patton and they were blessed with two sons: Danny and Ronny. Mary and Lawrence shared over thirty-three years together and many wonderful memories before he preceded her in death on March 31, 1983. Ronny, Mary’s son, also preceded her in death on August 14, 2005. Mary was a hardworking woman and worked for twenty years as a cook for the Waynesville R-VI School District. She enjoyed cooking for all the kids and teachers and was best known for her hot rolls that she would make from scratch. In her spare time, Mary loved to cook for her family and friends and in addition to being known for her hot rolls, her family loved her chocolate pies. Mary also enjoyed doing embroidery work and working outdoors in her vegetable garden and flowers. Most importantly, she loved spending time with her family, especially the grandchildren. Mary made a profession of faith early in life and was a member of the Deerlick Baptist Church of Waynesville. Mary leaves to cherish her memory, her son: Danny Patton (Marsha) of Richland, MO; four grandchildren: Jason, Mike, Lindsay and Megan; six great grandchildren: Brinlee, Montana, Kaitlynn, Wyatt, Alivia and Garrett; one great-great grandchild: Aubree; one sister: Vera York of Waynesville, MO; two brothers: Lloyd Gan of Richland, MO and Chester Gan of Richland, MO; daughter-in-law: Laura Newell of Crocker, MO; other relatives and friends. In addition to her parents, husband and son, Mary was preceded in death by two sisters: Wanda Flynn and Martha Tucker. Mary will be sadly missed, but fondly remembered by all who knew and loved her. Services were held at 12:00 p.m. Thursday, November 8, 2018 in the Deerlick Baptist Church of Waynesville, Missouri with Pastor Calvin Gladden and Pastor Danny Graves officiating. The songs “How Great Thou Art”, “The Old Rugged Cross” and “Amazing Grace” were played. Serving as escorts were Jason Patton, Michael Patton, Wyatt Patton, Terry Gan, Harvey Lynn Dye and Donald Myles. Serving as honorary escorts were Jim Patton and Greg Moore. Burial followed in the Deerlick Cemetery of Waynesville, Missouri. Services were under the direction of Memorial Chapels and Crematory of Waynesville / St. Robert. Memorial contributions may be made in memory of Mary Patton and may be left at the funeral home.

The family of Mary L. Patton created this Life Tributes page to make it easy to share your memories.