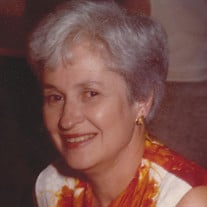 Mary Virginia (Harner) Scheerer was born on September 18, 1927 in Nevada, MO, at the home of her grandparents, Anna Belle Hayes and Theodore Brown Farry. She was the daughter and second child of Harold Russell and Esther Marie (Farry) Harner. Virginia departed this life at home asleep in her bed in Richland on August 13, 2014. Her siblings were Betty Ann Harner (the oldest), Dorothy Helen Harner (born after Virginia) and Joseph Theodore Harner (the youngest). They grew up in Joplin, Missouri. Her father Harold worked as a chemist for Eagle-Picher in Joplin, Missouri. As a child, Virginia’s parents took the family to Big Sugar Creek in MacDonald County in the southwest corner of Missouri. It became a place for family gatherings and vacations. Virginia’s father Harold built a concrete block house and retired there in 1966. It is still in the family. Virginia graduated high school in Joplin in 1945. That fall she started attending Joplin Junior College. There she met Curtis “Lee” Scheerer, who had been in the Army Air Corps in Europe in World War II, and was going to college on the G. I. Bill. Virginia and Lee graduated from the junior college in Spring 1947. Virginia and Lee were married on September 2, 1947. They lived in Sunflower Village, Kansas while Lee attended the University of Kansas, studying for his Pharmacy degree. Virginia worked for the Vernon Law Book Company. After Lee graduated, they moved to Joplin, Missouri where Lee worked as a pharmacist. Virginia and Lee had three children, Janice Lynn, Thomas Byron “Tom” and Julia Beth “Julie”. Janice was born in Kansas City and Tom and Julie were born in Joplin. In 1965, Lee and Virginia bought Dustin Rexall Drugstore from Ralph Dustin in Richland, Missouri, and ran the business successfully until 1984. They bought a house at 414 E. Jefferson in Richland, where Virginia and Lee lived for the rest of their lives. Virginia had many hobbies and was always artistic. She enjoyed sewing, crocheting and quilting. She painted with oil, acrylics and watercolors. She kept numerous scrap books, which are slices of history. Virginia played piano very well, but played primarily at home. She was also interested in genealogy, and researched her family history for over 30 years, mostly before personal computers and the Internet. She got the love of nature from her father. She learned about birds, flowers, plants and trees. She loved to tend her garden. Virginia was a good cook as well. Virginia and Lee loved to play bridge, and often had friends over. Virginia was a member of the Order of the Eastern Star, Athena Book Club, and a quilting club. Virginia was raised a Presbyterian, but became a member of the United Methodist Church when she moved to Richland. Her grandfather Theo Farry had been a Methodist preacher. He gave the benediction at her wedding when he was 101 years old. She was an active Church member, and a Church official. From the 1960’s onward, Virginia worked with bloodmobiles. Starting in the 1980’s, Virginia began organizing bloodmobiles, first for the Red Cross, then the Community Blood Center, and continued until 2013 at the age of 84. Virginia was also active with the AARP chapter and Senior Center in Richland. She helped induce the state of Missouri to replace the bridge over the Gasconade River on Highway 133, and to revise the street at Pine and Jefferson to have a sweeping curve instead of a tight corner. Virginia was proud of her children, and they all graduated college. She greatly enjoyed time spent with her children, grandchildren, her great grand-daughter Ilse, and brother and sisters and their families. Virginia and Lee got to travel after they sold the drugstore to Dennis Stockstill in 1984. They went to England and Europe. They went to many of the reunions for Lee’s WW II 409th bomber group. Lee died in January 1995. Virginia was preceded in death by her parents, her sister Betty Ann Kemm, Betty Ann’s husband Jim Kemm, her sister Dorothy Donaldson, and Dorothy’s husbands Ed Spracklen and Elmer Donaldson. Virginia is survived by her three children Janice Amelang and husband Karl of Germantown, TN, Tom Scheerer of the home and Julie Scheerer, Rockville, MD; her brother Joe Harner and his wife Mary Ruth of Rogers, AR; grandsons Hans Amelang and wife Sara, Kurt Amelang and Franz Amelang all of Memphis, TN; great grand-daughter Ilse Amelang; many cousins, nieces and nephews. Services were held at 3:00 p.m. Saturday, August 16, 2014 in the United Methodist Church of Richland, Missouri with Rev. Mitch Henson officiating. Joe Harner, brother of Virginia, gave a beautiful eulogy remembering his sister. Soloist Merlene Smith sang “Be Still My Soul” and the congregation sang “How Great Thou Art” and “When We All Get To Heaven”. Serving as honorary escorts were Hans, Kurt and Franze Amelang and Joseph Strain. Interment followed in the Oaklawn Cemetery of Richland, Missouri. Services were under the direction of Memorial Chapel of Richland. Memorial contributions may be made to the American Heart Association and contribution may be left at the funeral home.

Mary Virginia (Harner) Scheerer was born on September 18, 1927 in Nevada, MO, at the home of her grandparents, Anna Belle Hayes and Theodore Brown Farry. She was the daughter and second child of Harold Russell and Esther Marie (Farry) Harner.... View Obituary & Service Information

The family of Mary "Virginia" Scheerer created this Life Tributes page to make it easy to share your memories.