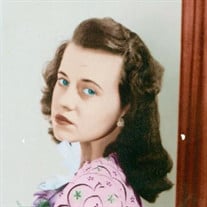 Mary Alma Sheehan, daughter of the late Charles Clayton and Cora Belle (Sidebottom) Duncan, was born August 16, 1928 in Louisville, Kentucky where she grew up and graduated from high school. On August 7, 1958, Mary was united in marriage to John Ernest Sheehan in Louisville, Kentucky. They shared over 55 years of marriage together and five children: Patricia, Donna, Charles, Jackie and Bennie. In 1962, Mary and the family moved to the Fort Leonard Wood area due to John being in the military. They lived in this area since then except for some time spent overseas for assignments. Mary worked for many years at the Fort Leonard Wood hospital in the treasurer department and retired in 1992. She loved being able to help provide for her family. In her spare time, Mary enjoyed reading magazines and sitting in the swing drinking coffee every morning. She loved being outdoors working in her garden, caring for her cats and raising chickens. Most importantly, she treasured spending time with her family and especially enjoyed fixing pot roast every Sunday for her family. Mary passed away Friday, June 13, 2014, in General Leonard Wood Community Army Hospital of Fort Leonard Wood, Missouri having attained the age of 84 years. Mary leaves to cherish her memory, her husband, John, of the home; 3 children, Patricia Zanetti (Charles) of Ocean Springs, MS, Donna Sharpensteen of Waynesville, MO, and Charles Cline of Crocker, MO; 6 grandchildren, Caleb Sharpensteen, Josh Sharpensteen (Tori), Brandy Gregory (Travis), Christina Goodin, Dianna Hicks, and Jessica Cline; 9 great-grandchildren; 4 great-great-grandchildren; and a host of other relatives and friends. In addition to her parents, Mary was preceded in death by one daughter: Jackie Lynn Sheehan; one son: Bennie Lee Cline; and one son-in-law: Ronald Sharpensteen. Graveside services were held at 11:00 a.m. Thursday, June 19, 2014 in the Eastlawn Cemetery of Springfield, Missouri with Rev. Christopher Hendrix officiating. The songs “If You Don’t Know Me by Now”, “In the Arms of an Angel” and “Somewhere Over the Rainbow” were played. Services were under the direction of Memorial Chapels and Crematory of Waynesville / St. Robert.

Mary Alma Sheehan, daughter of the late Charles Clayton and Cora Belle (Sidebottom) Duncan, was born August 16, 1928 in Louisville, Kentucky where she grew up and graduated from high school. On August 7, 1958, Mary was united in marriage... View Obituary & Service Information

The family of Mary Alma Sheehan created this Life Tributes page to make it easy to share your memories.