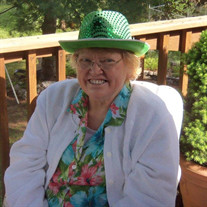 Mary Elizabeth Shockley, daughter of the late William E. and Gretchen Neoma Bernette (Carlson) Bills, was born April 26, 1943 in Corning, New York. As a young girl, Mary moved to Springfield, Missouri where she grew up and graduated from Central High School in 1961. She continued her education at Evangel College and graduated with her Bachelor of Science Degree in Education in 1965. After completing her degree, Mary began her teaching career at the Navaho Indian Reservation in Flagstaff, Arizona. She then moved to the Pulaski County area and taught school for 29 years with the Waynesville R-VI School District. She taught at Pershing and Partridge Elementary. Mary cared deeply for her students and spent long hours each day at school and even into late evening hours at home, in preparation for the next day. She retired from the school district in 1996. While teaching at Pershing Elementary, Mary met the love of her life, a fellow teacher by the name of Robert E. Shockley. They were united in marriage on October 15, 1977 at the Assembly of God Church in St. Robert, Missouri. They shared over 37 years of marriage together and were blessed with two children: Rob and Mary Ann. After retiring, Mary enjoyed going to the Warren Senior Center, playing games, volunteering at the center and was even elected queen at the center. In her younger years Mary played the piano and also played the clarinet while in high school. Mary greatly enjoyed traveling the countryside and was always in awe of God’s beautiful landscapes. Most importantly, she loved being with her family. Mary was a loving wife and mother. She was a hardworking, humble woman and always considered others before herself, never wanting any attention. At an early age, Mary made a profession of faith and was baptized. She was currently a member of the First Baptist Church of Richland where she was active in WMU, Valerie Seats. Mary also served in Awanas for 10 years in Sparks and also helped with VBS. She greatly enjoyed singing in the choir as long as she was able. Mary loved her church family and enjoyed helping any way that she could. Mary went home to be with her Lord Friday, June 19, 2015 in the Richland Care Center of Richland, Missouri having attained the age of 72 years. She will be sadly missed, but fondly remembered by all those that knew and loved her. Mary leaves to cherish her memory, her loving husband, Bob Shockley of the home; two children: Rob Shockley of Richland, MO and Mary Ann Matthews (Brian) of Richland, MO; one brother: Daniel Bills (Nancy) of Springfield, MO; several nieces, nephews, other relatives and friends. In addition to her parents, Mary was preceded in death by her father and mother-in-law: George and Gladys Shockley; and two brothers: David and Paul Bills. Services were held at 12:00 Noon, Tuesday, June 23, 2015, in the First Baptist Church of Richland with Pastor Mark Tallent and Pastor David Brown officiating. Pianist, Marleen Brown accompanied both soloists’, Vivian King as she sang “Beulah Land” and Georgia White as she sang “The Old Rugged Cross.” Mary’s brother, Paul Bills had written a song many years ago called, “Faith Can Light a Candle” that was also played during the service. In lieu of flowers, the family request memorial contributions be made in memory of Mary Shockley and left at the funeral home. Services were under the direction of Memorial Chapel of Richland.

Mary Elizabeth Shockley, daughter of the late William E. and Gretchen Neoma Bernette (Carlson) Bills, was born April 26, 1943 in Corning, New York. As a young girl, Mary moved to Springfield, Missouri where she grew up and graduated from... View Obituary & Service Information

The family of Mary Elizabeth Shockley created this Life Tributes page to make it easy to share your memories.

Mary Elizabeth Shockley, daughter of the late William E. and...