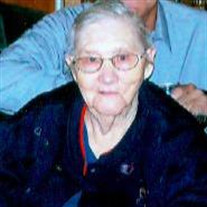 Mary Frances Skidmore, daughter of the late J.J. Ashworth and Elizabeth Jane Robbins Ashworth, was born March 21, 1920 in Duke, Missouri. She passed away Wednesday, January 17, 2018 in the Life Care Center of Waynesville having attained the age of 97 years. Mary grew up in the Duke and Gospel Ridge area. On August 14, 1937, at the age of 17, Mary was united in marriage to Lacy G. Skidmore in Waynesville, Missouri. They were blessed with six children: Joseph, Helena, Agnes, Lory, William and Daniel and shared over 42 years of marriage together before he preceded her in death in 1980. Mary worked for 23 years at the Waynesville Hospital before retiring. In her spare time, she enjoyed quilting, crocheting and working in her garden. As a young girl, Mary made a profession of faith and was a member of the Idumea Baptist Church of Laquey. She later moved her membership to the Pentecostal church and attended every chance she could. Mary will be sadly missed, but fondly remembered by all those that knew and loved her. She leaves to cherish her memory, her four children: Lory (Ann) Skidmore of Laquey, MO, Helena Miller of Richland, MO, Bill Skidmore of Waynesville, MO and Daniel (Tena) Skidmore of Cataula GA; many grandchildren, great-grandchildren and great-great grandchildren. In addition to her parents, Mary was preceded in death by one son, Joseph H. Skidmore, one daughter, Agnes P. Martz and three sisters. Services were held at 1:00 p.m. Friday, January 19, 2018 in the Memorial Chapels and Crematory of Waynesville / St. Robert with Pastor Eric Shaw officiating. The songs “Farther Along” and “On the Wings of a Dove” were played. Serving as escorts were her loving family. Burial followed in the Palace Cemetery of Big Piney, Missouri. Memorial contributions may be made in memory of Mary Skidmore and may be left at the Memorial Chapel and Crematory of Waynesville.

Mary Frances Skidmore, daughter of the late J.J. Ashworth and Elizabeth Jane Robbins Ashworth, was born March 21, 1920 in Duke, Missouri. She passed away Wednesday, January 17, 2018 in the Life Care Center of Waynesville having attained the... View Obituary & Service Information

The family of Mary Frances Skidmore created this Life Tributes page to make it easy to share your memories.

Mary Frances Skidmore, daughter of the late J.J. Ashworth and...