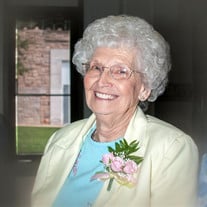 Mary Lou (Black) Southard, daughter of the late Floyd and Ida (Sanders) Black, was born June 22, 1929 in Brownfield, Missouri where she grew up and attended grade school at Prospect in a one room building. She later graduated from Richland High School. At an early age, Mary Lou made a profession of faith and joined the Fairview Baptist Church. In later years, she moved her membership to the Independence Baptist Church where she served as choir leader and pianist for many years. On April 1, 1950, Mary Lou was united in marriage to Jack W. Southard and they shared over 43 years of marriage together and were blessed with four children: Wanda, Wilma, Larry and Elizabeth. In her early married life, Mary Lou worked at Fort Leonard Wood and then decided to quit her job to be a full time mom to her two youngest children, Larry and Elizabeth. According to Mary Lou, Larry was excited about this change so that way he would have “pies and cookies and good food to eat.” After her children were older, Mary Lou went back to work at the Central Ozark Medical Clinic in Richland and retired after several years. In her spare time, Mary Lou enjoyed cooking, baking, sewing and doing embroidery. She was a member and past Worthy Matron of the Success #87 Order of the Eastern Star of Richland and also a member of the Warren Senior Center. Mary Lou loved her family deeply and cherished every moment she could spend with them. She went home to be with her Lord on Thursday, January 25, 2018 in the Mercy Hospital of Lebanon, Missouri having attained the age of 88 years. Mary Lou leaves to cherish her memory, her three children: Wanda Pruitt (John) of Richland, MO, Wilma Jenkins (Patrick) of Olathe, KS and Larry Southard (Anita Ivey) of Richland, MO; six grandchildren: Douglas Pruitt, Robert Pruitt, Heather Warren, Thomas Voigt, Abigail Voigt and Richard Ivey; seven great grandchildren; one sister-in-law: Clara Mae Black of Edgar Springs, MO; one brother-in-law: Fred Southard of Lebanon, MO; several nieces, nephews, other relatives and a host of friends. In addition to her parents, Mary Lou was preceded in death by her husband, Jack Southard (March 3, 1994); her daughter, Beth Voigt (December 15, 2013); four brothers: James R. Black, George W. Black, Thomas H. Black and Verlan A. Black; five sisters: Helen Anderson, Watye Nicks, Loraine Meilahn, Ruth Harrison and Della Howlett; five brothers-in-law: Clarence Harrison, Bryan Nicks, Ed Anderson, Rollins Howlett and Luther Meilahn; and three sisters-in-law: Augusta Black, Rose Black and Esther Black. Services were held at 11:00 a.m. Monday, January 29, 2018 in the Memorial Chapel of Richland with Pastor John Dinwiddie officiating. Soloist Becky Lercher sang “Amazing Grace (My Chains Are Gone)” and also led the congregation in singing “What A Day That Will Be”. Serving as escorts were L.E. Gibson, Rob Pruitt, Doug Pruitt, J.R. Black, Douglas Black and Thomas Voigt. Serving as honorary escorts were Jerry Black, Lee Roy Robinson, Jim Dietiker, Morris Howlett and Herschel Cantrell. Burial followed in the Pine Creek Cemetery of Nebo, Missouri. Memorial contributions may be made in memory of Mary Lou Southard to the Pine Creek Cemetery Fund or the Warren Senior Center of Richland and may be left at the funeral home.

Mary Lou (Black) Southard, daughter of the late Floyd and Ida (Sanders) Black, was born June 22, 1929 in Brownfield, Missouri where she grew up and attended grade school at Prospect in a one room building. She later graduated from Richland... View Obituary & Service Information

The family of Mary Lou Southard created this Life Tributes page to make it easy to share your memories.