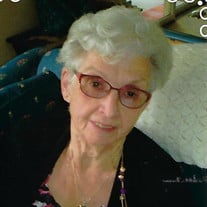 Mary Louise Summerfield, daughter of the late Ronald Lewis and Estella Almeda (Bechstein) Chamberlain, was born April 16, 1934 in Custar, Ohio. She passed away Wednesday, May 29, 2019 in the Rolla Presbyterian Manor of Rolla, Missouri having attained the age of 85 years. Mary grew up in Custar, Ohio and graduated from Milton Township High School with the Class of 1952. She continued her education by attending St. Vincent Hospital School of Nursing in Toledo, Ohio and graduated in 1955 as a Registered Nurse. During her working years, Mary worked as a nurse at the Buena Vista Clinic in Sierra Vista, Arizona, the Alaska Psychiatric Institute in Anchorage, Alaska, and the Pulaski County Hospital in Waynesville, Missouri. She also owned and operated House of Flowers in St. Robert, Missouri and the last 15 years before she retired in 1995, she was employed at General Leonard Wood Army Community Hospital of Fort Leonard Wood, Missouri. On September 14, 1957, Mary was united in marriage to James A. Watts. They shared two children, Nancy and Robert. James preceded her in death on December 7, 1981. On September 1, 1990, Mary was united in marriage to Earl “Blu” Summerfield. They shared over twenty-eight years of marriage together and many wonderful memories before he preceded her in death on December 4, 2018. Mary was very involved in the St. Robert community. She was on the original board of the St. Robert Chamber of Commerce, and served on the St. Robert Park Board. She was also a former Cootie of the VFW Auxiliary and also a member of the Missouri Nurses Association. She was a very giving person and several years ago, she began making two trips a year to St. James to Boys Town to have parties for them. Mary was also a member of the Crocker Presbyterian Church of Crocker, Missouri. In her spare time, Mary enjoyed working in her flower and vegetable gardens, dancing, traveling, and was especially talented when it came to crocheting and sewing. She loved to make items for her family and friends. She was a huge St. Louis Cardinal baseball and Lady Bears basketball fan. She looked forward to watching, listening or attending any games that she could. Most importantly, she treasured the times that she could spend with her family, especially the grandchildren. Mary is survived by her daughter, Nancy Watts of St. Robert, MO; her son, Robert Watts (Tabatha) of Dixon, MO; five grandchildren, Christina Watts, Rollin Kelley, Curtis Kelley (Desirae), and Jessica and Jamie Farris; six great-grandchildren, Adan, Anthony, Amare “A.J.”, Angel, Alexis, and Karsyn; her brother, Paul Chamberlain (Marian) of Weston, OH; a number of nieces and nephews; as well as a host of other relatives and friends. In addition to her parents and husbands, Mary was preceded in death by one brother and sister-in-law: David and Barbara Chamberlain; and one foster sister: Virginia Reynolds. Funeral services were held at 1:00 p.m. Monday, June 3, 2019 in the Memorial Chapels and Crematory of Waynesville / St. Robert with Rev. Cindy T. Dack officiating. Soloist Becky Lercher sang “He Touched Me”, “Amazing Grace” and “How Great Thou Art”. Several family members and friends recalled their wonderful memories of Mary. Serving as escorts were family and friends. Burial followed in the Missouri Veterans Cemetery of Waynesville. Memorial Contributions in memory of Mary Summerfield may be may be left at the funeral home.

Mary Louise Summerfield, daughter of the late Ronald Lewis and Estella Almeda (Bechstein) Chamberlain, was born April 16, 1934 in Custar, Ohio. She passed away Wednesday, May 29, 2019 in the Rolla Presbyterian Manor of Rolla, Missouri having... View Obituary & Service Information

The family of Mary Louise Summerfield created this Life Tributes page to make it easy to share your memories.

Mary Louise Summerfield, daughter of the late Ronald Lewis and...