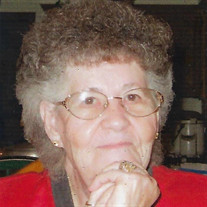 Mary Louise (Stevens) Woody was born March 2, 1928 in Miami, Oklahoma to the union of the late Carl Leslie and Mary Ellen (Moore) Stevens. Mary met the love of her life, Don Woody, in December of 1946. They were united in marriage on January 11, 1947 and were happily married for fifty-seven years before he passed away in 2004. They were blessed with two children, Ronald Lee Woody and Rebecca Lynn Woody. Mary was a homemaker, a wonderful cook and seamstress. She enjoyed cooking and sharing with her friends and family. There wasn’t an evening that there wasn’t a friend or family member sitting at Mary’s table enjoying a meal with her family. Mary was a member of the Idumea Baptist Church and she loved going to church. She especially enjoyed the fellowship time with her church family. Mary served on the Laquey Board of Education for many years. She loved her community and trying to make things better for the teachers and students in the Laquey school district. Mary also owned and operated the Candyland Cake Shop in St. Robert for many years. She made cakes, cookies, candy and pies. When she closed her cake shop, she continued making cakes from her home. Mary loved going to “Texaco” in Buckhorn. You could almost set your watch to it and you would find her there at 10:00 a.m. and 6:00 p.m. to have her coffee and honey bun and to catch up on all the local news. You would find her sitting there sometimes gathered around with friends and neighbors and sometimes sitting there alone. But either way, she greatly enjoyed it! One of Mary’s greatest treasures in life was her family. She loved her kids and when the granddaughters came along, they became her world. Don and Mary were known as Gammom and PaPa. Mary became a resident of Life Care Center of Waynesville in September 2015. The staff and residents will always remember her for her singing. She loved to sing and one of her favorites was “You Are My Sunshine”. As her mind began to slip away, she would forget the words, so she just made up her own but always sang to the tune of “You Are My Sunshine”. Mary went home to be with her Lord and be reunited with Don on Saturday, January 12, 2019 in the Life Care Center of Waynesville, Missouri having attained the age of eighty-nine years, ten months and ten days. She will be greatly missed, but fondly remembered by all those who knew and loved her. Mary leaves to cherish her memory, her two children: Becky Blevins of St. Louis, MO and Ron Woody (Tina) of Waynesville, MO; three grandchildren: Jennifer Shupe (Terry) of Waynesville, MO, Kristin Blevins of Louisville, KY and Brooke Blevins of St. Robert, MO; four great grandchildren: Jaycee, Jaymee, Justin and Jackson Flynt; several nieces, nephews, other relatives and friends. In addition to her parents and husband, Mary was preceded in death by one brother: John Stevens; and two sisters: Carleen Harper and Margie Davis. Services were held at 11:00 a.m. Wednesday, January 16, 2019 in the Memorial Chapels and Crematory of Waynesville / St. Robert with Pastor Danny Graves officiating. Soloist Becky Lercher sang “Amazing Grace”, “How Great Thou Art” and “I’ll Fly Away”. The song “You Are My Sunshine” was played. Serving as escorts were Tom Woody, Josh Woody, Bill Woody, Bob Woody, Terry Shupe and Mark Miner. Burial followed in the Sunset Memorial Estates Cemetery of Waynesville. Memorial contributions may be made in memory of Mary Woody and may be left at Memorial Chapels and Crematory of Waynesville / St. Robert.

Mary Louise (Stevens) Woody was born March 2, 1928 in Miami, Oklahoma to the union of the late Carl Leslie and Mary Ellen (Moore) Stevens. Mary met the love of her life, Don Woody, in December of 1946. They were united in marriage on... View Obituary & Service Information

The family of Mary Louise Woody created this Life Tributes page to make it easy to share your memories.