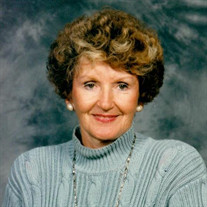 Mattie Elizabeth Kesler was born on February 11, 1934 in Hendersonville, North Carolina. She passed away Thursday, May 18, 2017 in the University of Missouri Hospital of Columbia, Missouri having attained the age of 83 years. Mattie was united in marriage to MAJ Pat Kesler and they were blessed with four daughters: Patsy Elizabeth, Lola Pam, Kimberly Blanche and Terri Lee. Pat preceded her in death after 58 years of marriage. Due to Pat being in the military, Mattie raised her four daughters while traveling the world as an Army wife for 20 years. She was a tremendous vital support to her husband throughout his military career and the remainder of his life. One of her greatest joys was leading all of her girls to a relationship with Jesus Christ. She was very involved in her church, First United Methodist Church of Daleville and one of her greatest loves was singing for the Lord in the choir. She was very strong in service working as a Girl Scout leader, helping prepare meals for the Methodist Youth Fellowship, was a long-standing member of the Officer Wives Association, member of the Red Hat Society and was very active in the Daleville PTA. Mattie became a licensed cosmetologist and she owned and operated a very successful salon, “Mattie’s His and Hers”. Mattie and her husband also enjoyed playing golf and that passion led them to their final home at the Dothan National Golf Course where they joined their lifelong friends, George and Hilda Caldwell. Mattie leaves to cherish her memory her four loving daughters: Beth Gillette (Rob) of Waynesville, MO, and Pam Gleason (Paul), Kim Bullard (Brad), and Terri Healy, all of Dothan, AL; seven grandchildren: Aaron, Christopher, Brandi, Brooke, Trevor, Troy and Amanda; five great grandchildren; several nieces, nephews, other relatives and friends. Mattie was loved by so many; she was a role model to many, a strong Christian woman, very devoted to her family, and graced us all with her love and support. She will be greatly missed, but leaves us all with so many happy memories. Services were held at 11:00 a.m. Thursday, May 25, 2017 in the First United Methodist Church of Daleville, Alabama with Rev. Charles Lee Jones officiating. Special music provided by Debi Corbett and the congregation sang “Amazing Grace”, “It Is Well” and “Softly and Tenderly”. Arrangements were under the direction of Memorial Chapels and Crematory of Waynesville / St. Robert. Memorial contributions may be made in memory of Mattie Kesler and may be left at the funeral home.

Mattie Elizabeth Kesler was born on February 11, 1934 in Hendersonville, North Carolina. She passed away Thursday, May 18, 2017 in the University of Missouri Hospital of Columbia, Missouri having attained the age of 83 years. Mattie... View Obituary & Service Information

The family of Mattie Elizabeth Kesler created this Life Tributes page to make it easy to share your memories.

Mattie Elizabeth Kesler was born on February 11, 1934 in Hendersonville,...