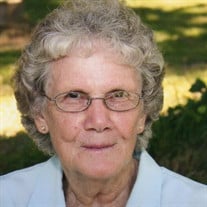 Stella Maxine Luttrell was welcomed into this world by her parents, Gilbert John and Ella Adaline (Calvert) Henson on Tuesday, April 14, 1936 and entered her Heavenly home on the evening of, Tuesday, March 6, 2018, at Lake Regional Hospital, Osage Beach, Missouri, having attained the age of 81 years, 10 months, and 20 days. Maxine, as she was known by, was born in Montreal, Missouri, where she attended school before moving to Stoutland; there she graduated from the eighth grade. Maxine soon met a young, handsome, Junior Louis Luttrell, and she knew he was the one she wanted to spend the rest of her life with. On December 20, 1953, in Swedeborg, Missouri, the two were married and to this union, four children were born. Maxine and Junior shared nearly forty one wonderful years together before his passing on September 27, 2000. Maxine accepted Jesus Christ as her Lord and Savior at a young age, following in baptism. She became a long time member of Elm Grove Baptist Church on September 25, 1959, where she served for nearly fifty nine years. Maxine was a faithful Christian servant of God. She loved her church family dearly, as they did her. Maxine always looked forward their Sunday dinners and those special times of fellowship with one another. As well as, being a loving, devoted housewife and homemaker, Maxine also worked hard outside the home at both the old H.D. Lee Plant and Brown Shoe Factory, retiring after thirty years. However, Maxine always found time to enjoy crocheting and working in her flower and vegetable gardens. But, time spent and the special memories made with her family, friends, especially her grandchildren, were most precious to her. Maxine will always be remembered for her loving sweet spirit and warm smile. She leaves behind to cherish her memory, her four children: Kathy DeMott and her husband, DW of Swedeborg, MO, Richard Luttrell and his wife, Kathy of Lebanon, MO, Gayla Phillips and her husband, Mike of Preston, MO and Timmy Luttrell and his wife, Kelley of Richland, MO; six grandchildren: Christie Hoy, Chad and Dustin Luttrell, Aaron and Matthew Phillips and Tim Hoy; two great grandchildren: Clayton and Timmy “Peanut” Hoy; one brother: Bob Henson of Gravois Mills, MO, and Maxine’s extra special friend, James Baranowski of Richland, MO; her special brother-in-law, Sam Luttrell, numerous nieces, nephews and other relatives and friends. Maxine was preceded in death by her parents, her beloved husband, Junior, eight brothers: Walter, Warren, Jewell, Tip, Jack, John B., Jimmy and Junior Henson, and one sister: Dorothy Pentecost. Faith and family came first to Maxine, and though we don’t know what tomorrow holds...we can know who holds the future. Maxine intimately knew her Lord and is now safely home. Services were held at 1:00 p.m., Saturday, March 6, 2018, in the Memorial Chapel of Richland with Pastor Bradley Jemes and Pastor Bill Tallant officiating. Favorite songs included, “Amazing Grace,” “When I Get Where I Am Going,” “I Can Only Imaging’ and “I Want to Stroll Over Heaven” were played. Serving as escorts were Matt Wall, Tim Gormley, Tim Hoy, Matthew Phillips, Brian Becker and Jason Phelps. Honorary escorts were Estel Becker, Greg Black, Larry Baranowski and Sam Luttrell. Burial followed in the Elm Grove Cemetery near Richland, Missouri. Services were under the care and direction of Memorial Chapel of Richland. Memorial contributions may be made in memory of Maxine Luttrell to the Elm Grove Cemetery Fund and may be left at the Memorial Chapel of Richland.

Stella Maxine Luttrell was welcomed into this world by her parents, Gilbert John and Ella Adaline (Calvert) Henson on Tuesday, April 14, 1936 and entered her Heavenly home on the evening of, Tuesday, March 6, 2018, at Lake Regional Hospital,... View Obituary & Service Information

The family of Maxine Luttrell created this Life Tributes page to make it easy to share your memories.

Stella Maxine Luttrell was welcomed into this world by her parents,...