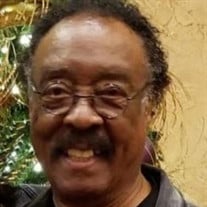 Melvin Dudley “Mac” McNair, son of the late Johnnie McNair, Sr. and Hazel Lucille Sutton, was born November 7, 1941 in Norfolk, Virginia where he grew up and attended school. At the age of 17, Mac, as he was known by his friends and family, enlisted in the United States Army and served for 24 years before retiring in 1983. For his faithful service, Mac received several awards and commendations; some of which include: Good Conduct Medal (6th Award), Bronze Star Medal w/V Device, Combat Infantry Badge, National defense Service Medal w/Oak Leaf Cluster, Drill Sergeant Badge, Driver Badge, Bronze Star Medal w/2 Oak Leaf Clusters, Good Driver Award w/Badge, Army Service Ribbon, Overseas Service Ribbon (2), Republic of Vietnam Campaign Medal, Vietnam Service Medal w/1 Silver Service Star, Vietnam Cross of Gallantry w/Palm, Meritorious Service Medal and NCO Professional Development Ribbon (1). He had attained the rank of Sergeant First Class. On October 31, 1987, Mac was united in marriage to Beverly Smith in Williamsburg, Virginia. They shared over 32 years and two children: Angela and Michael. After retiring from the military, Mac continued serving his country as a civil service employee. He worked as an EEO Specialist on Fort Leonard Wood until his retirement. Mac loved music; he enjoyed singing and playing the congo drums. He liked to ride his Spider and was a member of the Christian Motorcycle Club. You could find him watching a football game every chance he could, and especially a Pittsburgh Steeler game. He was a member of the Veterans of Foreign Wars and Heroes to Heroes and also served with a prison ministry. Most importantly, he loved his family and enjoyed spending time with them as much as possible. At an early age, Mac had made a profession of faith and was a member of the Calvary Gospel Church in Duke, Missouri for over 25 years before he and Beverly began attending First Assembly of God in St. Robert in recent years. Mac went home to be with his Lord Friday, September 25, 2020 in the Harry S. Truman Veterans Hospital of Columbia, Missouri having attained the age of 78 years. He will be sadly missed, but fondly remembered by all those that knew and loved him. Mac leaves to cherish his memory, his wife: Beverly McNair of the home; nine children: Angela McNair of Waynesville, MO, Michael McNair of Springfield, MO, Michelle Corbett of Charlotte, NC, Constance McNair-Aldrich of Conyers, GA, Cheryl Spann (Ronnie) of Irmo, SC, DeAndra Mason-McNair of Portsmouth, VA, Elihu Smith of Williamsburg, VA, Wendy Talton (William) of Killeen, TX and SGM Rebecca Franco of Crocker, MO; a host of grandchildren and great grandchildren; six Godchildren; one brother: Johnnie McNair, Jr. of Norfolk, VA; one sister: Jean Watson (Melvin) of Chesapeake, VA; mother-in-law: Mary Smith of Williamsburg, VA; several nieces, nephews, other relatives and friends. In addition to his parents, Mac was preceded in death by one brother: Donald McNair; and one sister: Mary Kay Smith. Funeral services were held at 11:00 a.m. Friday, October 2, 2020 in the Memorial Chapels and Crematory of Waynesville / St. Robert with Travist Patrick officiating. Dana Woods sang “I’m Turning to the Light” and recalled her wonderful memories of Mac. Serving as escorts were family and friends. Burial with military honors followed in the Missouri Veterans Cemetery of Waynesville with Missouri Honors Team providing honors. Memorial contributions may be made in memory of Mac McNair and may be left at Memorial Chapels and Crematory of Waynesville / St. Robert.

Melvin Dudley &#8220;Mac&#8221; McNair, son of the late Johnnie McNair, Sr. and Hazel Lucille Sutton, was born November 7, 1941 in Norfolk, Virginia where he grew up and attended school. At the age of 17, Mac, as he was known by his friends... View Obituary & Service Information

The family of SFC (Ret) Melvin Dudley "Mac" McNair created this Life Tributes page to make it easy to share your memories.