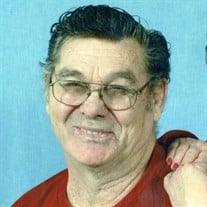 Merrel Lee Payne, son of the late Merrel J. and Bonnie Lee (Lundstrom) Payne, was born August 24, 1940 at the family homestead in Swedeborg, Missouri. Merrel grew up in Swedeborg and graduated from Richland High School in 1958. On June 3, 1961, Merrel was united in marriage to the love of his life, Donna Darlene Witt. They were married in Richland, Missouri and spent the next 53 years together. They were blessed with two sons. As a high school kid, Merrel began his working career. He worked as a butcher and delivered groceries for Cowan and Bryants Store in Richland. After his marriage to Donna, Merrel began working as a brick mason and served his apprenticeship under Donna’s dad, Bud Witt. Merrel always credited his success as a brick mason to the teaching he received from Bud. Merrell worked with several different people over the years and in his later years, he owned and operated his own business in masonry. In his spare time, Merrel loved to be outdoors; whether it was fishing, hunting, golfing or competing in archery. He enjoyed teaching his son Mark archery and they would have contests between themselves and Mark eventually was able to beat his d ad; which Merrel was secretly proud of. Merrel was very community minded and served as an alderman for the City of Richland for over 10 years. He also served on the Park Board and held offices with the Richland Saddle Club. He also spent time as a coach for Mark’s baseball team when Mark was still in school. At an early age, Merrel made a profession of faith and was currently a member of the First Baptist Church of Richland. He attended every chance he could until his health did not permit him to do so. Merrel loved his family dearly and enjoyed spending time with his grandchildren. They were the apple of his eye and he would light up when anyone bragged on them. Merrel went home to be with the Lord the afternoon of January 14, 2015, in the Cox South Health Care System, Springfield, Missouri having attained the age of 74 years. He will be sadly missed, but fondly remembered by all those that knew and loved him. Merrel leaves to cherish his memory, his loving wife Donna Payne of Richland, MO, one son: Mark Payne (Barb) of Richland, MO; 2 grandchildren: Danessa Payne (John McPherson) of St. Robert, MO and Matthew Payne (Anna) of Richland, MO; 2 step grandsons: Brandon and Brian Radford, both of St. Robert, MO; 5 great grandchildren and one on the way; one brother, Bryce Payne and his wife Susan of El Dorado Springs, MO; a sister-in-law Rae Lynn Payne of Richland, MO; sister-in-law: Susan Schultz (Don) of Lees Summit, MO; brother-in-law: Don Witt (Nancy) of Richland, MO; constant companion, his dog Lollipop; several nieces, nephews, other relatives and friends. In addition to his parents, Merrel was preceded in death by an infant son; and one brother: Kerry Payne. Even though he is gone from our sight, his memory will live on in our hearts forever. Services were held at 11:00 a.m., Saturday, January 17, 2015 in the Memorial Chapel of Richland with Pastor Bob Lilly officiating. Recorded songs by Elvis Presley included “He Touched Me,” “Amazing Grace” and “I’m Gonna Walk Dem Golden Stairs.” Pianist, Marleen Brown accompanied Merrel Breyer as he sang “Peace in the Valley.” Serving as escorts were JM Wallis, Scotty McMahan, Sam Luttrell, Bobbie Baker, Steve Belshe and Don Raines. Honorary escorts were Harold Smith and Lee Roy Myers. Burial followed in the Bethlehem Cemetery near Swedeborg, Missouri. Services were under the direction of Memorial Chapel of Richland. Memorial contributions are suggested in memory of Merrel Lee Payne to the First Baptist Church Scholarship Fund and may be left at the funeral home.

Merrel Lee Payne, son of the late Merrel J. and Bonnie Lee (Lundstrom) Payne, was born August 24, 1940 at the family homestead in Swedeborg, Missouri. Merrel grew up in Swedeborg and graduated from Richland High School in 1958. On June 3,... View Obituary & Service Information

The family of Merrel Lee Payne created this Life Tributes page to make it easy to share your memories.