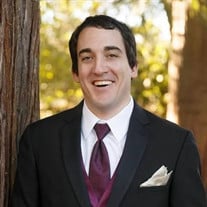 SPC Michael S. Erich Leinbach, age 35, of Waynesville, MO passed away Tuesday, Sept. 24, 2019, in Springfield, MO. Funeral Services with Full Military Honors will be held at 6 p.m. Monday, Sept. 30, 2019, in Memorial Chapels and Crematory of Waynesville/St. Robert. Visitation will be held Monday from 4p.m. until service time in the funeral home. Michael is survived by his wife, Jessica, and his daughter, Arianna Jade, of the home; his parents, Bill and Jana Leinbach of American Fork, Utah; a brother, Josh Leinbach and his wife, Haley of Bellingham, WA; a niece, Evelyn Leinbach; his mother-in-law, Sally Fossum and her husband, Stephen of Waynesville, MO; his father-in-law, James Marco of Anaheim, CA; and a sister-in-law, Gabby Marco of Las Vegas, NV; as well as a host of other relatives and friends. Memorial Contributions in memory of Michael Leinbach may be left at the funeral home.

The family of SPC Michael S. Erich Leinbach created this Life Tributes page to make it easy to share your memories.