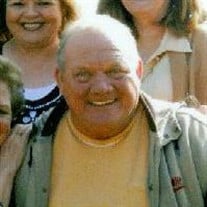 Michael Dennis “Mike” Hable, son of the late Jerry Frank Hable and Velma Hable, was born February 23, 1949 in St. Louis, Missouri. At an early age, he made a profession of faith and was baptized. Mike went home to be with his Lord Thursday, September 14, 2017 in the Mercy Hospital of Lebanon, Missouri having attained the age of 68 years. Mike, as he was known by his family and friends, grew up in St. Robert, Missouri and graduated from Waynesville High School of Waynesville, Missouri. Shortly after graduation, Mike enlisted in the United States Army and served his country faithfully until his honorable discharge. On May 22, 1971 in Trenton, New Jersey, Mike was united in marriage to Mary Elizabeth “Liz” McGlone. They shared over 46 years of marriage together and were blessed with two children: Michael and Melanie. After his honorable discharge from the military, Mike worked as an auto mechanic and owned and operated Mike’s Marine. He continued to serve his country as a civil service employed with TACOM on Fort Leonard Wood where he retired just two months ago. In his spare time, Mike loved spending time with his wife, children, grandchildren and siblings. He also enjoyed fishing and tinkering with just about anything. Mike went out of his way to help others and had a love for abandoned animals. He loved the simplicity of life and made the best out of every day. Mike brought out the best in people. Mike will be sadly missed, but fondly remembered by all those that knew and loved him. He leaves to cherish his memory, his loving wife: Liz Hable of the home; two children: Michael (Julie) Hable of Richland, MO and Melanie (Dan) Barry of Morristown, NJ; five siblings: Sharon (James) Greer of St. Robert, MO, Patti (Audie) Luna of Springfield, MO, Ione (Larry) Thornhill of Richland, MO, Beverly Post of Laquey, MO and Debbie (Richard) Harris of Crocker, MO; five grandchildren: Jessica (Tristan) Hendrix, Lea Hable, Danny and Caitlin Barry; one “adopted” grandson: Noah Schultheiss; other relatives and friends. In addition to his parents, Mike was preceded in death by one brother, Jerry Hable. Services with military honors were held at 10:00 a.m. Wednesday, September 20, 2017 in the Missouri Veterans Cemetery of Waynesville, Missouri with Pastor Richard and Debbie Harris officiating. Military honors were provided by the Missouri Honors Team. Services were under the direction of Memorial Chapels and Crematory of Waynesville / St. Robert. Memorial contributions may be made in memory of Michael Hable and may be left at the funeral home.

Michael Dennis &#8220;Mike&#8221; Hable, son of the late Jerry Frank Hable and Velma Hable, was born February 23, 1949 in St. Louis, Missouri. At an early age, he made a profession of faith and was baptized. Mike went home to be with his Lord... View Obituary & Service Information

The family of Michael "Mike" D. Hable created this Life Tributes page to make it easy to share your memories.