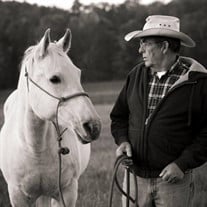 Michael Lynn “Mike” Nickels, son of the late Albert Lee and Edna Eunice (Coogan) Nickels, was born July 12, 1947 in Waynesville, Missouri. On December 31, 1968 in Waynesville, Missouri, Mike was united in marriage to Nina Marie Lindsay. They shared almost 52 years of marriage together and were blessed with two children: Angela Lynn and Michael Ernest. Mike was drafted into the United States Army and served his country faithfully until his honorable discharge. He then returned to Waynesville where he worked for the Waynesville School District as the Data Processor and wrote the programs and systems for the school. He rarely took a day off and there were times he would work late into the night, or even all night, to make sure things continued to run smoothly. He was committed to education and in his later years, he served on the Plato School Board for a number of years. Mike’s real love was the outdoors, the farm, his grandchildren, and his horses. At an early age, he was riding his pony or hooking him up to pull a wagon. He spent time on the farm with his Pa and learned to work the land and the livestock. In high school, he learned to calf rope thanks to Calvin Whitaker. The love of the sport drove him to practice until he reached the National High School Rodeo finals where he competed in calf roping and forged his mother’s signature to give Bull Dogging a try. Throughout his life, he always had a horse or mule around the house. He rode mules to follow hounds; trained and used teams to take the wagon on a camping trip or to plow his garden or even to put up his hay. He helped break a horse for a friend and found his way back into foundation bred quarter horses. Hickory Jack was his first. Dad was known to whisper “Whoa” from across the way and would watch one of the riders be surprised when Hickory Jack would stop. Mike ended up with the trio of Hickory, Nub, and Bugs who were hauled to rodeos for calf roping and team roping, and even goat tying as his grandson joined in. Later in life, he started working with Missouri Fox Trotters. He loved to work with young colts, and he was particularly good at figuring them out. He loved to ride the gravel roads and trails, and every now and then just take off into the woods. His keen sense of direction and ability to see the same pond he recently passed as a new pond someone must have just built, earned him constant ribbing. He would just laugh and would tell us “just follow Red Feather and you will be just fine.” Mike enjoyed being out in nature and would marvel at how the Creator had made everything. He knew this Creator personally as he had made a profession of faith in Jesus Christ many years ago. He was a member of the Nebo Christian Church where he served as a deacon. Mike went home to be with his Lord on Sunday, December 6, 2020 in his daughter’s home after suffering a stroke. He had attained the age of 73 years, 4 months, and 25 days. He will be sadly missed, but fondly remembered by all those that knew and loved him. He leaves to cherish his memory, his wife: Nina Nickels of Falcon, MO; two children: Angie Rhoads (Randy) of Lebanon, MO, and Michael Nickels (Angela) of Rolla, MO; three grandchildren: Jon Rhoads (Danielle) of Nebo, MO, Clayton Nickels of Rolla, MO, and Graham Nickels of Rolla, MO; one brother: Marvin Nickels (Leslie) of Lansing, KS; sisters-in-law: Linda Nickels of Moscow, ID and Christie Nickels of Moscow, ID; several nieces, nephews, other relatives, and friends. In addition to his parents, Mike was preceded in death by three brothers: Jackie, Ronald, and Donald Nickels; and one sister-in-law: Jacqueline Nickels. Funeral services were held at 11:00 a.m. Friday, December 11, 2020 in the Memorial Chapels and Crematory of Waynesville / St. Robert with Pastor Richard Breeden officiating. Angie Rhoads, daughter of Mike, recalled her wonderful memories of her dad. Also sharing memories was Gilbert Crismon and he sang “How Great Thou Art” and “Peace in the Valley”. Serving as escorts were Jon Rhoads, Gabe Whittle, Tim Seams, Rob Weaver, Scotty Goforth, and Gary Baker. Serving as honorary escorts were Randy Rhoads, Dwayne Baker, and Chris Cook. Burial followed in the Idumea Cemetery of Laquey, Missouri. Memorial contributions may be made in memory of Mike Nickels to St. Jude’s Children’s Hospital or Salvation Army and may be left at Memorial Chapels and Crematory of Waynesville / St. Robert.

The family of Michael Lynn "Mike" Nickels created this Life Tributes page to make it easy to share your memories.