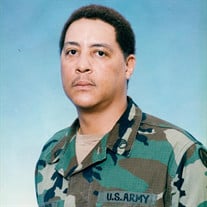 SFC (Ret) Michael Angelo Strickland, son of the late Ernest and Mary Cathreen (Allen) Strickland, was born January 24, 1952 in Newport News, Virginia where he grew up and attended school. Michael entered the United States Army and served his country faithfully until his retirement in 1993. He had attained the rank of Sergeant First Class and earned several awards and commendations; some of which include: Meritorious Service Medal, Army Commendation Medal - 4th Award, Army Achievement Medal - 2nd Award, Army Good Conduct Medal - 6th Award, National Defense Service Medal - 2nd Award, Southwest Asia Service Medal, Noncommissioned Officer Professional Development Ribbon - 3rd Award, Army Service Ribbon, Overseas Service Ribbon - 5th Award and Expert Qualification Badge M-16 Rifle. In the early 1990s, Michael was transferred to Fort Leonard Wood and he remained in the area after his retirement. On December 16, 1975, Michael was united in marriage to Srinuan Kehawattakanon in Sattahip, Chon Buri. They shared over 41 years of marriage together and were blessed with two daughters: Michelle Angelique and Nicole Monique. After retiring from the military, Michael was able to do more of the things he enjoyed. He collected coins and stamps and liked to have them organized and also enjoyed working on model airplanes. Most importantly, he loved spending time with his family and friends, especially the grandchildren. Michael passed away Wednesday, April 26, 2017 in the General Leonard Wood Army Community Hospital of Fort Leonard Wood, Missouri having attained the age of 65 years. He will be sadly missed, but fondly remembered by all those that knew and loved him. He leaves to cherish his memory, his wife: Srinuan Strickland of the home; two daughters: Michelle Angelique Ellsworth (Andy) of Riverview, FL and Nicole Monique Hopkins (Justin) of O’Fallon, IL; three grandchildren: Devon and Eunice Ellsworth and Olivia Hopkins; four siblings: Barbara, Major, and Lee Strickland and Mary “Patricia” Johnson, all of Newport News, VA; numerous nieces, nephews, and other relatives and friends. In addition to his parents, Michael was preceded in death by one brother, Herbert “Antonio” (Tony) Strickland and one sister Clarissa “Ernestine” Jones. Services were held at 1:00 p.m. Tuesday, May 2, 2017 in the Memorial Chapels and Crematory of Waynesville / St. Robert with Rev. Eddie Goodman officiating. The songs “His Eye Is on the Sparrow” and “Spirit in the Sky” were played. Burial with military honors followed in the Missouri Veterans Cemetery of Waynesville. Military honors were provided by the United States Army of Fort Leonard Wood, Missouri. Memorial contributions may be made in memory of Michael Strickland and may be left at the funeral home.

The family of SFC (Ret) Michael Angelo Strickland created this Life Tributes page to make it easy to share your memories.