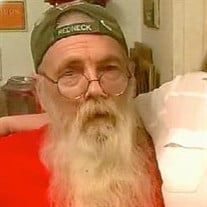 Michael “Mike” Steven Arbogast, Sr., son of Frankie and Mary Ann Arbogast, was born September 21, 1957 in St. Louis, Missouri where he grew up and graduated from Roosevelt High School. On April 20, 1992, Mike was united in marriage to Cindy Joan Kemper in St. Louis, Missouri. They shared 37 years together and were blessed with one son, Michael “Mike” Arbogast, Jr. Mike was a truck driver and enjoyed traveling from place to place and seeing the countryside. In his spare time, the one thing he loved more than anything was going up and down the Mississippi River in his boat. He also enjoyed fishing and shooting his guns. Most importantly, he loved his family and treasured the times that he could spend with them. Mike passed away Sunday, June 25, 2017 in his home having attained the age of 59 years. He will be sadly missed but fondly remembered by all those that knew and loved him. Mike Arbogast is survived by his wife: Cindy of the home; one son: Michael “Mike” Arbogast Jr.; two brothers: Bob (Pam) Boshers and Mark (Crystal) Arbogast; one sister: Roxanne Boshers; seven grandchildren: Haley, David, Harper and Amaya Lynn Rowberry and Emma Joan and Michael Steven Arbogast III and Violet Pedraza; other relatives and friends. Memorial services were held at 4:00 p.m., Thursday, June 29, 2017 in the Memorial Chapel of Richland, Missouri with Pastor Christopher Hendrix, Sr. officiating. Music recordings included “Simple Man,” “Huntin`, Fishin` and Lovin` Every Day” and “All My Rowdy Friends.” Military Honors were provided by the Missouri Honors Team. Services were under the direction of Memorial Chapel of Richland. In lieu of flowers, memorial contributions may be made in memory of Mike Steven Arbogast and may be left at the funeral home.

Michael &#8220;Mike&#8221; Steven Arbogast, Sr., son of Frankie and Mary Ann Arbogast, was born September 21, 1957 in St. Louis, Missouri where he grew up and graduated from Roosevelt High School. On April 20, 1992, Mike was united in marriage... View Obituary & Service Information

The family of Mike Arbogast created this Life Tributes page to make it easy to share your memories.