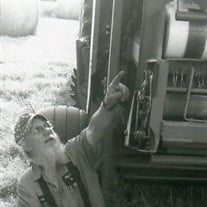 Mikel Gilbert Henson, son of Bobby M. and Shirley J. (Trietsch) Henson, was born in Flower Mound, Texas on October 17, 1961 and entered into his heavenly home, Tuesday, May 17, 2016 at the age of 54 years and 7 months. “Mike”, as he was known to his family and friends, moved to Richland, Missouri at the age of twelve where he grew up and attended school. Mike’s Grandpa Trietsch donated land to start Trietsch Methodist Church in Flower Mound, Texas. Mike referred to him as “Preacher Man” and as a young boy made his profession of faith in Christ. In Mike’s younger days he worked for Howard Quarries and for James and Jimmy Brackett before opening up his own business, Mike Henson’s Garage near Stoutland, Missouri. He then partnered up with his longtime friend, Steve Maddux and together began selling farm equipment today known as, M&M Equipment. He enjoyed working on machinery, especially International tractors, as those were his favorite and his home was a reflection of this love and passion. Mike kept busy all day, all nights and every day, enjoying life and helping others. When he wasn’t working in his garage, Mike could be found outdoors farming, working with his cattle, harvesting or dozing down trees. In the past he really enjoyed going to tractor pulls and to the races. Mike was a jokester and believed in having fun where ever he was. He never met a stranger and was a friend to all. Mike loved spending time with his family and friends however; his grandchildren were his pride and joy and brought him the greatest joy of all. Mike leaves behind to cherish his memory his loving companion, Erma Henson “Maw” of their home; his father, Bobby Henson of Stoutland, MO; his children: Adam (Katy) Henson of Richland, MO, Lacy Powell (Daniel) of Colorado Springs, CO, Cody Henson (Katie) of Cuba, MO, Shawn Allison “Skillet” of the home; Amy Hinshaw, who was like a daughter to him and her daughter, Emilie Hinshaw both of Stoutland, MO, a very special niece, Jessica Ogle of Lebanon, MO; 4 grandchildren: Molly Henson, Aubrey Henson, Jaxon Powell, Natalee Henson; one sister: Vickie Crismon (Stan) of Crocker, MO; one brother: Erwin Henson (Tammy) of Gravois Mills, MO; his close friend, Steve Maddux of Richland, MO, who was like a brother; several nieces, nephews, other relatives and friends. He was preceded in death by his beloved mother, Shirley Henson and one brother, Joe Henson. If you ever met Mike he was the kind of fella you’d never forget. The laughter and joy he shared with those around him will always be treasured. He was loved and respected throughout his community and Mike’s absence will be greatly missed by those whose lives he touched. Services were at 11:00 a.m., Saturday, May 21, 2016 in the Memorial Chapel of Richland with Pastor's David Douglas and Billy Williams officiating. Soloists, Steve Mino, Chris, Missy and Joe Miller sang "The Old Rugged Cross," "Go Rest High on That Mountain," and "This is Just What Heaven Means to Me." Serving as escorts was Adam Henson, Cody Henson, Jimmy Brackett, Matt Evans, Troy Frederick, Tommy Mitschele, Steve Maddux and Kenny Parker. Honorary escorts included James Brackett, Steve Belshe, Ivan Maddux, Charley Fritts and D.J. Ferguson. Faithful Employees, Anthony Lawrence, Paul Shelton, Don Pollock and Joyce Leep. Burial followed in the Beulah Cemetery near Richland, Missouri. Services were under the direction of Memorial Chapel of Richland. In lieu of flowers, memorial contributions may be made in memory of Mike Henson to Shriners Hospital for Children and can be left at the Memorial Chapel of Richland. Online condolences may be left at www.memorialchapelsandcrematory.com

The family of Mikel Gilbert Henson created this Life Tributes page to make it easy to share your memories.