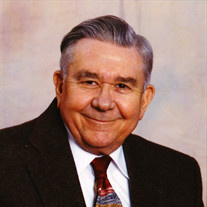 MSG (Ret) Milton Loyd Thomas, son of the late Walter Benjamin and Amy Ellen (Justice) Thomas, was born January 22, 1929 in Stillwell, Oklahoma. He went home to be with his Lord Friday, December 6, 2019 in the Missouri Baptist Home of Ozark, Missouri having attained the age of 90 years, 10 months and 15 days. Milton grew up in Stillwell, Oklahoma where he attended school. In September of 1946, he entered the United States Army and served his country faithfully until his retirement in 1967 after 21 years of service. He had attained the rank of Master Sergeant and earned several awards and commendations; some of which include: National Defense Service Medal (Oak Leaf Cluster), Vietnam Campaign Medal w/device and the Vietnam Service Medal. Due to being in the military, Milton moved to different posts and retired at Fort Leonard Wood, Missouri where he decided to stay. On November 20, 1970, Milton was united in marriage to Janet Louise (Gladden) in Waynesville, Missouri. At the time of their union, Milton gained two sons, John and Todd, whom he loved dearly. Milton, Janet and the boys had many good memories together and Janet preceded him in death on July 31, 1998. Milton loved being outdoors. He enjoyed working in his garden and raising goats. He was also an avid St. Louis Cardinal baseball fan and would either watch them on TV, listen to them on the radio or go the games whenever he could. He hardly missed a game. Most importantly, he loved his family and looked forward to every time they could spend together, especially with the grandchildren. Early in his life, Milton had made an important decision and accepted Jesus Christ as his Savior. He served at every church he was a member of over the years and most recently, he was a member of the Faith Baptist Church of Waynesville. He enjoyed greeting everyone as they came through the door and making them feel at home with his friendly smile. Milton will be sadly missed, but fondly remembered by all those who knew and loved him. He leaves to cherish his memory, his two stepsons: John Wagner (Wendy) of St. Louis, MO and Todd Wagner (Jenell) of Willard, MO; four grandchildren: Tara Brigham (Nick), Bethanie Tait (Austin), and Emily Albert (Cameron) all of Springfield, MO and Kathryn Wagner of Willard, MO; two great grandchildren: Abbi Tait and Bella Tait; other relatives and friends. Even though he is gone from our sight, Milton will live on in our hearts forever and we know that we will see his smiling face again. Funeral services were held at 11:00 a.m. Friday, December 13, 2019 in the Faith Baptist Church of Waynesville, Missouri with Pastor Danny Graves reading the obituary and Tracie Storie officiating. Becky Lercher sang “What A Day That Will Be” and “It Is Well With My Soul”. Serving as escorts were Danny Alexander, Nathan Alexander, Kenneth Lemons, Phil Todd, Richard York and Nick Brigham. Burial with military honors followed in the Waynesville Memorial Park Cemetery of Waynesville with military honors being provided by the United States Army of Fort Leonard Wood, Missouri. Memorial contributions may be made in memory of MSGT (Ret) Milton Thomas to the Faith Baptist Church of Waynesville and may be left at Memorial Chapels and Crematory of Waynesville / St. Robert.

MSG (Ret) Milton Loyd Thomas, son of the late Walter Benjamin and Amy Ellen (Justice) Thomas, was born January 22, 1929 in Stillwell, Oklahoma. He went home to be with his Lord Friday, December 6, 2019 in the Missouri Baptist Home of Ozark,... View Obituary & Service Information

The family of MSG (Ret) Milton Loyd Thomas created this Life Tributes page to make it easy to share your memories.