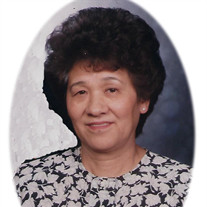 Miyoko Tsuruya Mills, daughter of the late Kannosuke Tsuruya and Yoshia Sugano, was born on June 15, 1927, in Muroran, Hokkaido, Japan. She passed away Friday, October 26, 2018, in the Mercy Hospital of Lebanon, Missouri having attained the age of ninety-one years. Miyoko was united in marriage to a United States soldier, James Albert Fulton, Junior, on November 13, 1953 in Sapporo, Hokkaido, Japan. Miyoko came to the United States in 1956. Due to James being in the military, the family was transferred to Texas, Alaska, Colorado, and Missouri. Miyoko obtained her United States Citizenship in December of 1962 while in Alaska. Miyoko and James A. Fulton, Jr. had three children, Richard, Judy Ann, and a stillborn son. Miyoko was preceded in death by her stillborn son, daughter, Judy Ann Fulton (age 3 days), and her husband, James Albert Fulton, Junior. On January 3, 1973, Miyoko was united in marriage to James Mills in St. Robert, Missouri. They shared many wonderful memories and loved to travel to different places together. Miyoko was full of energy and spirit. She loved to cook and feed everyone, including her family and guests that would come to her home. She enjoyed teaching her family Japanese cooking and spending time with her friends. She was a beautiful and classy lady, who loved her family tremendously and enjoyed spending time with them. Miyoko leaves to cherish her memory, her husband, James of the home; her son, Richard Fulton and his wife, Monica of Waynesville, MO; two grandchildren, Alison Fulton of Columbia, MO and Adam Fulton (Kelli) of Hillsboro, MO; two great-grandchildren, Adalyn and Reed Fulton; several family members in Hokkaido, Japan; as well as a host of other relatives and friends. In addition to her parents, husband James A. Fulton, Jr., stillborn son and daughter Judy Ann Fulton, Miyoko was preceded in death by her brothers and sisters. She will be sadly missed, but fondly remembered by all those who knew and loved her. Even though she is gone from our sight, Miyoko will live on in our hearts forever. Services were held at 6:30 p.m. Monday, October 29, 2018 in the Memorial Chapels and Crematory of Waynesville / St. Robert with Pastor Richard Breeden officiating. The songs “Amazing Grace” and “Go Rest High on that Mountain” were played. Inurnment was held at 11:00 a.m. Tuesday, October 30, 2018 in the Missouri Veterans Cemetery of Waynesville. Services were under the direction of Memorial Chapels and Crematory of Waynesville / St. Robert. Memorial contributions may be made in memory of Miyoko Mills and may be left at the funeral home.

Miyoko Tsuruya Mills, daughter of the late Kannosuke Tsuruya and Yoshia Sugano, was born on June 15, 1927, in Muroran, Hokkaido, Japan. She passed away Friday, October 26, 2018, in the Mercy Hospital of Lebanon, Missouri having attained the... View Obituary & Service Information

The family of Miyoko T Mills created this Life Tributes page to make it easy to share your memories.