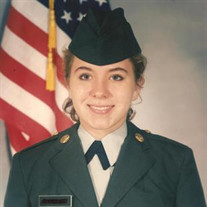 Monica Laurie Powell, daughter of Daniel Raymond and Mary Alice (Berry) Spampanato, was born October 17, 1972 in San Francisco, California. As a young girl, she grew up in Germany where her father was stationed. The family was transferred to the Fort Leonard Wood, Missouri area and Monica graduated from Waynesville High School. Monica entered the United States Army and served her country faithfully until her honorable discharge. For her faithful service, she received several awards and commendations; some of which include: Army Commendation Medal (3rd Award), Army Achievement Medal, National Defense Service Medal (2nd Award), Global War on Terrorism Service Medal, Army Service Ribbon, and Armed Forces Reserve Medal w/M Device. She had attained the rank of Staff Sergeant. After leaving the military, Monica began working as a civil service employee. In her spare time, she enjoyed anything baseball and also loved to read. Monica was blessed with two sons, Dillon and Justin and they were the pride of her life. She loved spending time with her boys and family. Monica passed away Thursday, March 10, 2016 in Columbia, Missouri having attained the age of 43 years. She will be sadly missed, but fondly remembered by all those that knew and loved her. Monica leaves to cherish her memory, two sons: Dillon Powell and wife Tiffany of St. Robert, MO and Justin Powell of Waynesville, MO; parents: Dan and Mary Spampanato of Waynesville, MO; other relatives and friends. Monica was preceded in death by one sister: Danielle Spampanato. Services with military honors were held at 1:00 p.m. Thursday, March 24, 2016 in the Missouri Veterans Cemetery of Waynesville with Rev. Christopher Hendrix officiating. Military honors were provided by Missouri Honors Team. Services were under the direction of Memorial Chapels and Crematory of Waynesville / St. Robert. Memorial contributions may be made in memory of Monica Powell and may be left at the funeral home.

Monica Laurie Powell, daughter of Daniel Raymond and Mary Alice (Berry) Spampanato, was born October 17, 1972 in San Francisco, California. As a young girl, she grew up in Germany where her father was stationed. The family was transferred... View Obituary & Service Information

The family of Monica Laurie Powell created this Life Tributes page to make it easy to share your memories.