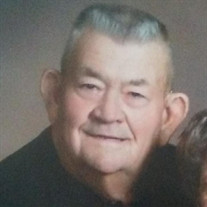 Morris Lee Howlett, son of the late Rollins Robert and Della Martha (Black) Howlett, was born November 28, 1944, in Waynesville, Missouri. On March 20, 1965, Morris married the love of his life, Linda Jean George, and together they have shared a lifetime of laughter and love that carried them through the challenges of life, and their love grew deeper and deeper with each passing year. After graduating from Richland High School, Morris went on to Auto Mechanics School in Kansas City. He later drove a dump truck for his dad and a gas truck for Barney Brown. He also worked for the Foremost Milk Company before beginning his 30 year career at Frito Lay, from where he retired. In his younger days Morris played town team basketball for years and even some co-ed volleyball. He was a life time member of the Fox Trotter Association and greatly enjoyed showing Quarter horses for a short time, later went on to Fox Trotters, winning the World Champion Amateur Model Class two years. He also loved being outdoors working with his cattle. Awe heck, Morris just simply enjoyed sittin’ around looking at his cattle. At an early age, Morris made a profession of faith and followed in baptism at Fairview Baptist Church. Later, his family moved in to Richland where he began attending church at First Baptist, later becoming a member there. Once you ever met Morris Howlett, you would never forget him. He had a million dollar smile and a laugh to go with it, not to mention his signature flat top. Morris was never embarrassed to act silly or goofy, because that was just his nature. Morris was going to have a good time...no matter what! Once he ever got a laugh out of person, he just kept them laughing. He was a man who enjoyed life and the people in it; even if he was just a little mischievous and ornery at times. In the quiet moments of Tuesday, April 3, 2018, Morris peacefully left his earthly home to enter into his heavenly home and to be in the presence of his Lord, with his loving wife, Linda by his side, having attained the age of 73 years. He will be sadly missed, but fondly remembered by all those who knew and loved him. Morris leaves behind to cherish his memory his loving wife, Linda of the home, two brothers: Robert Howlett (Mary Louise) of Richland, MO and Max Howlett (Vonnie) of Bolivar, MO; one sister: Katherine Gan (Lloyd) of Richland, MO; several nieces, nephews and a host of other relatives and friends. Morris was preceded in death by his beloved parents, Rollins and Della. Services were held at 12:00 noon, Friday, April 6, 2018, in the Memorial Chapel of Richland with Pastor Joe Garman officiating. Close friend, Art Bryant read the obituary, and also shared some of his happy memories of Morris. Pianist, Marleen Brown accompanied, soloist, Georgia White as she sang, “Jesus Hold My Hand” and “I’ll Fly Away.” Serving as escorts were Tracy Brown, Trevor Howlett, Scotty McMahon, Danny Howlett, Eddie Howlett, Greg Black and Donnie Bolan. Honorary escorts were L.D. Dampier, Lee Roy Myers, Keith Lundh, Art Bryant, Jerry Stenson and JR Black. Burial followed in the Oaklawn Cemetery, Richland, Missouri. Services were under the care and direction of Memorial Chapel of Richland. Memorial contributions may be made in memory of Morris Howlett to Hospice Compassus, 5780 Osage Beach Parkway, Suite #230, Osage Beach, MO 65065, and can either be mailed or left at the Memorial Chapel of Richland. Online condolences can be sent at www.memorialchapelsandcrematory.com.

Morris Lee Howlett, son of the late Rollins Robert and Della Martha (Black) Howlett, was born November 28, 1944, in Waynesville, Missouri. On March 20, 1965, Morris married the love of his life, Linda Jean George, and together they have shared... View Obituary & Service Information

The family of Morris Lee Howlett created this Life Tributes page to make it easy to share your memories.