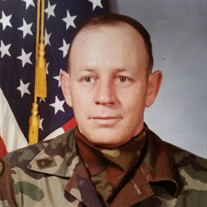 Morris Earl King, son of the late Woodrow “Tootie” Taylor King and Ruth “Polly” Lorene (Fincher) King, was born September 30, 1942 in Linden, Texas. As a young man, Morris entered the United States Army and served his country faithfully until his retirement in 1985. He had attained the rank of Sergeant First Class and earned several awards and commendations; some of which include: National Defense Service Medal, Vietnam Service Medal, One Overseas Service Bar, and Vietnam Campaign Medal. On September 18, 1973, Morris was united in marriage to Harumi (Holly) Akamine in Miami, Oklahoma. They shared over 44 years of marriage together and were blessed with two children: Lora Alex and Roy James. Morris continued serving his county for several years as a civil service employee. In 1997 he began working for the City of St. Robert as an exterior lineman and retired. In his spare time, Morris enjoyed being outdoors hunting and fishing. Mostly, he loved spending time with his family and friends. Morris passed away Wednesday, September 20, 2017 in the Silverstone Place of Rolla, Missouri having attained the age of 74 years. He will be sadly missed, but fondly remembered by all those that knew and loved him. Morris leaves to cherish his memory, his wife, Harumi King of the home; one daughter: Lora King-Goolie of St. Robert, MO; five brothers: W.T. King, Gene King, Alvin Reno King, Charlie King and William L. King; one sister: Ruth King-Brown; several nieces, nephews, other relatives and friends. In addition to his parents, Morris was preceded in death by his son Roy James King; and Jewel and Kirk Carwell. Graveside services with military honors were held at 12:00 p.m. Saturday, September 23, 2017 in the Sunset Memorial Estates Cemetery of Waynesville, Missouri with Pastor Chris Hendrix officiating. Military honors were provided by the United States Army of Fort Leonard Wood, Missouri. Services were under the direction of Memorial Chapels and Crematory of Waynesville / St. Robert. Memorial contributions may be made in memory of Morris King and may be left at the funeral home.

The family of SFC (Ret) Morris Earl King created this Life Tributes page to make it easy to share your memories.