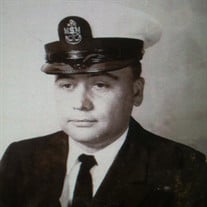 Morris Ray McNeill, son of David Petty and Beulah (Garner) McNeill was born July 3, 1934 in High Point, North Carolina and departed this life on August 2, 2019 at his home in Richland, Missouri, having attained the age of 85. Morris had acquired several nick names over his life span; “Pete” was his boyhood name; later it became “Chief” while serving in the Navy; others just called him “Mac.” Morris grew up in High Point, North Carolina. It was there, he joined the Navy on December 9, 1953 and was soon sent off to California for Bootcamp; due to illness Morris was restricted to land duty only; serving as a Data Processing Technician. He went on to District of Columbia where he met Ruth Ann Abele and the two married on March 17, 1956, residing in DC for five years; before going on to Hawaii, then Virginia, and finally back to Hawaii. He received the Vietnam Service Medal (2 Bronze Stars) Good Conduct Medal (Fifth Award), Exceptional Performances Awards as Lead Computer Operator acting as Chief of Computer Operations, JSCM Certificate and Citation, a JSCM Medal (SC), and Certificate’s in recognition of his faithful, zealous and obedient naval service. Morris retired from the Navy receiving an honorable discharge for his faithful service to his country. He and Ruth, after 20 years of service they decided to move their family to Missouri; settling in the quaint little town of Richland. It was there Morris decided to become an EMT; and was one of the first EMT’s for Pulaski County. Morris enjoyed working there for 8 years, before deciding to continue with his computer career; so, Morris went over to Fort Leonard Wood and went to work for Civil Service. Morris retired after 15 years there. However, he wasn’t the kind to sit still. He always kept himself busy. Morris was a member of Richland’s First Assembly of God church. He was readily available to help with the old church’s progression over the years. Morris attended as his health allowed. Morris enjoyed working on his computer, farming, and was an avid St. Louis Cardinal Baseball fan. Most folks didn’t know that Morris played fast pitch softball while in the military. He loved the game. Morris was preceded in death by his parents, one brother, James W. McNeill, and two sisters, Margaret Hunt and Mildred Milan. Morris leaves behind to cherish his memory his beloved wife, Ruth of the home; three children, Debra Aebig (Edward), David W. McNeill (Elizabeth) and Karen R. York (Kenneth) all of Richland, MO; 4 grandchildren, Angela Ogle (Nathan), Zachary McNeill (Kylie), Zayne McNeill and Dakota York all of Richland, MO, 4 great grandchildren, Aaron and Ashlyn Ogle and Grace and Elijah McNeill; one twin sister, Mabel Queen from the state of NC; several nieces, nephews, and other relatives and friends. Morris loved his family and was especially proud of his grandchildren and great grands. He was a loving son, brother, uncle, husband, father, grandfather, great grandfather and friend. Morris will be greatly missed by those who knew and loved him. A private graveside inurnment was held at 9:00 a.m., Wednesday, August 14, 2019 in the Missouri Veterans Cemetery of Waynesville, Missouri. Arrangements were under the care and direction of Memorial Chapel of Richland, Missouri. Online condolences may be sent to www.memorialchapelsandcrematory.com

Morris Ray McNeill, son of David Petty and Beulah (Garner) McNeill was born July 3, 1934 in High Point, North Carolina and departed this life on August 2, 2019 at his home in Richland, Missouri, having attained the age of 85. Morris had acquired... View Obituary & Service Information

The family of SCPO (Ret) Morris McNeill created this Life Tributes page to make it easy to share your memories.