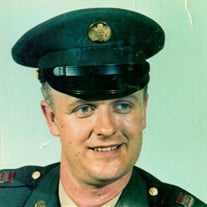 SFC (Ret) Murlin Ralph Carpenter, son of the late Veral M. and Lucille (Adkisson) Carpenter, was born May 4, 1940 in Barry, Illinois where he grew up and graduated from high school. The day after graduating from high school, Murlin entered the United States Army and served his country faithfully for the next 20 years. He had attained the rank of Sergeant First Class and earned several awards and commendations; some of which include: National Defense Service Medal, Army Operation Medal (Germany), Republic of Vietnam Campaign Medal, Good Conduct Medal - 6th Award, Army Commendation Medal (1st Oak Leaf Cluster), Vietnam Service Medal with 3 Bronze Service Stars, and the Meritorious Service Medal. While serving in Germany, Murlin met Waltraud “Christa” Gutzeit, and on September 29, 1960 in Berlin, they were united in marriage. They shared over 55 years together and many wonderful memories before she preceded him in death on December 9, 2015. After retiring from the military, Murlin he continued to serve his country and community as a police officer with the St. Robert Police Department for 20 years. After retiring from the force, he worked at Walmart in St. Robert for several years. After his retirement, Murlin was able to do things that he enjoyed doing. He loved his wife tremendously and being at home with her and their dog companions. When he was younger, Murlin was an avid bowler and had several trophies in his home that he was proud of. Murlin passed away Sunday, March 26, 2017 in the Rosewood Care Center of Rolla, Missouri having attained the age of 76 years. He will be sadly missed, but fondly remembered by all those that knew and loved him. He leaves to cherish his memory, his two sisters: Jeannie M. Waiting (John) of Tinley Park, IL and Sherry S. Carpenter of Quincy, IL; a number of nieces, nephews, other relatives and friends. In addition to his parents and wife, Murlin was preceded in death by three brothers: Roger, Gary and Larry Carpenter. Services were held at 1:00 p.m. Thursday, March 30, 2017 in the Memorial Chapels and Crematory of Waynesville / St. Robert with Chaplain Charles Banks officiating. The songs “When I Get Where I’m Going” by Brad Paisley and “Bridge Over Troubled Waters” by Elvis Presley were played. Serving as escorts were the United States Army. Burial with military honors followed in the Missouri Veterans Cemetery of Waynesville. Military honors were provided by the United States Army of Fort Leonard Wood, Missouri. Memorial contributions may be made in memory of Murlin Carpenters and may be left at the funeral home.

SFC (Ret) Murlin Ralph Carpenter, son of the late Veral M. and Lucille (Adkisson) Carpenter, was born May 4, 1940 in Barry, Illinois where he grew up and graduated from high school. The day after graduating from high school, Murlin entered... View Obituary & Service Information

The family of SFC (Ret) Murlin Ralph Carpenter created this Life Tributes page to make it easy to share your memories.