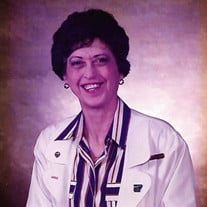 Nancy Jo Burris was born May 21, 1939 in Siloam Springs, Arkansas. She was the younger of two daughters born to the union of Clarence Alfred and Nancy M. (Ward) Burris. Nancy and her family attended the First United Methodist Church of Siloam Springs. Nancy was born with a cleft pallet, so she spent much of her pre-school years in Oklahoma City and Tulsa, Oklahoma, where she received reconstruction surgeries and speech therapy. She attended school in Siloam Springs where she graduated with the class of 1957. Nancy kept in contact with many of her classmates. In 1960, Nancy received her diploma in Nursing from the Hillcrest Medical Center in Tulsa, where she was the Charge Nurse of the Neurosurgical Unit. She earned her certificate in post graduate courses in Neurosurgical Unit. She earned her certificate in post graduate courses in Neurological/Neurosurgical Nursing from the Montreal Neurological Institute in Canada. She later completed curse work at Duke University and the University of North Carolina toward her Bachelor of Nursing. While at Duke, she was the Head Nurse of the Surgical Unit and was later promoted to the Supervisor of Neurosurgery. In 1972, Nancy took a position as the Coordinator, Director, Head Nurse of Neurology/Neurosurgery at the University of Arkansas Medical Sciences. She also held positions of Director of Special Units, Neurosurgery/Neurology, Child Psychiatry and the Emergency Room. She was very proud to be a consultant to Arkansas Children’s Hospital for patient classification systems. In 1984, Nancy became the Legislative Nurse at the Arkansas State Capitol and held that position for several years. It is an understatement to say that Nancy was a true pioneer in her field. After leaving the position at the Capitol, Nancy enjoyed caring for others as a home health nurse. A very important part of Nancy’s life was as a 40 year friend of Bill Wilson. She was a mentor to people all over the United States. She was a shining example of a gracious, honest, loyal and steadfast friend. Nancy loved to travel with her friends and co-workers. She was an avid Razorbacks fan and grew beautiful flowers in her yard, but her greatest love was her dogs, Mac, Murdock and Maddie. Nancy went to her heavenly home in the morning of June 27, 2021, at the age of 82 years, 1 month and 6 days. Nancy is survived by many, many friends and neighbors who loved her dearly. She was preceded in death by her parents, Clarence “Tadpole” Burris and Nancy M. Burris; her sister, Mary Pope and her fur babies, Mac, Murdock and Maddie.

Nancy Jo Burris was born May 21, 1939 in Siloam Springs, Arkansas. She was the younger of two daughters born to the union of Clarence Alfred and Nancy M. (Ward) Burris. Nancy and her family attended the First United Methodist Church of Siloam... View Obituary & Service Information

The family of Nancy Jo Burris created this Life Tributes page to make it easy to share your memories.