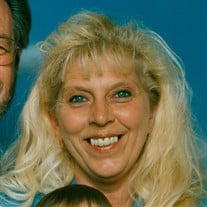 Nancy Colleen Carlson, daughter of the late James Walter and Iris Alma (Limesand) Trotter, was born July 1, 1952 in Wolf Point, Montana. Nancy grew up in Circle, Montana and graduated from high school in Kalispell, Montana. On August 15, 1970, Nancy was united in marriage to Gerald Walter Carlson in Kalispell, Montana. They shared over 45 years of marriage together and were blessed with two sons: Brad and Jeff. Gerald entered the United States military. Gerald, Nancy, and the family were transferred to Fort Leonard Wood, Missouri where they remained after Gerald was honorably discharged. For most of her working years, Nancy worked in Housekeeping at General Leonard Wood Army Community Hospital on Fort Leonard Wood and towards the end of her time there she served as Manager. In her spare time, Nancy loved to go shopping, collecting clocks and she dearly loved her animals. Most importantly, she treasured time spent with her family, especially playing games with the grandchildren. Nancy passed away Saturday, August 13, 2016, in her home, in Waynesville, Missouri having attained the age of 64 years. She will be sadly missed, but fondly remembered by all those that knew and loved her. Nancy leaves to cherish her memory, her husband, Gerald of the home; two sons, Brad Carlson and wife, Carrie of Kenosha, Wisconsin, and Jeff Carlson and wife, Caren of Chugiak, Alaska; 4 grandchildren, Kaylee, Karlee, Kody, and Kolton Carlson; a brother, Mike Trotter and his wife, Karen of Richey, Montana; a number of nieces and nephews; as well as a host of other relatives and friends. Services were held at 2:00 p.m. Wednesday, August 17, 2016 in the Memorial Chapels and Crematory of Waynesville, Missouri with Rev. Christopher Hendrix officiating. The songs “I Love a Rainy Night” by Eddie Rabbit, “Amazing Grace” by Elvis Presley, “Go Rest High on that Mountain” by Vince Gill and “Kokomo” by the Beach Boys were played. Serving as honorary escorts were Brad Carlson, Jeff Carlson, Mike Trotter, Keith Pendleton and Allen Wood. Memorial contributions may be made in memory of Nancy Carlson to the American Cancer Society and may be left at the funeral home.

The family of Nancy Colleen Carlson created this Life Tributes page to make it easy to share your memories.

Nancy Colleen Carlson, daughter of the late James Walter and...