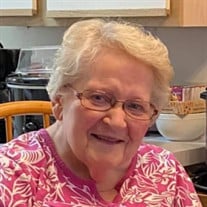 Naomi June Shelden, daughter of the late Oad Long and Marie (Carroll) Long, was born March 2, 1934, in Waynesville, Missouri where she grew up and attended rural schools and graduated from Waynesville High School. At an early age, Naomi made an important decision in her life and accepted Jesus Christ as her Savior. She has been a faithful member of the Westside Baptist Church of Waynesville since 1961. She served as the church librarian, taught Sunday School, and was willing to help wherever she was needed. Naomi was blessed with five children: Bradley, Russell, Lindell, Suzanne, and Cynthia. She took great pride in providing for them and was a hard worker. She worked at Waynesville Security Bank for a short time until she began working on Fort Leonard Wood as a Civil Service employee. After leaving Fort Leonard Wood, she worked at First State Bank for one year before she began working for the Waynesville R-VI School District. She served there for 31 years before retiring in 1997. Naomi was a lifetime member of the Educational Secretary’s Association. After retiring from the school district, Naomi worked at Westside Baptist Church as the financial secretary. She was also able to do more of the things that she enjoyed. She was an avid reader and enjoyed working with her hands, whether it was in her garden, cooking, or doing craft projects. Most importantly, she loved spending time with her family, especially her grandchildren and great grandchildren. She was enormously proud of every one of them and was an encouragement to them in whatever they were facing. Naomi went home to be with her Lord, Saturday, May 29, 2021, in the Northridge Place Assisted Living of Lebanon, Missouri having attained the age of 87 years. She will be sadly missed, but fondly remembered by all those that knew and loved her. Naomi leaves to cherish her memory, her five children: Bradley Shelden (Susan) of Waynesville, MO, Russell Shelden (Tina) of Waynesville, MO, Lindell Shelden (Brenda) of Bolivar, MO, Suzanne Dobson (Robert) of Rockledge, FL, and Cynthia Emory (Dick) of Waynesville, MO; one sister: Linda Cox (Grant) of Waynesville, MO; one sister-in-law: Joy Long of Namba, ID; twelve grandchildren: Travis, Samantha, Melanie, Brice, Chris, Kayla, Sara, Adam, Amber, Kendall, Ashley, and Christina; several great grandchildren, nieces, nephews, other relatives, and friends. In addition to her parents, Naomi was preceded in death by two brothers: Alvin Long and Donald Long. Funeral services were held at 10:00 a.m. Friday, June 4, 2021 in the Memorial Chapels and Crematory of Waynesville / St. Robert with Pastor John Shaw and Pastor Lindell Shelden officiating. Pianist Renita DeMalade accompanied Mike Freeman as he led the congregation in singing "Amazing Grace" and "At Calvary". Soloist Becky Lercher sang "Celebrate Me Home" and the song "Go Rest High on that Mountain" by Vince Gill was played. Serving as escorts were Travis Shelden, Brice Shelden, Chris Shelden, Adam Shelden, Patrick Phillips, and Stephen Rose. Serving as honorary escorts were Brett Cox, Jason Cox, Ryan Daugherty, and Kendall Dobson. Burial followed in the Waynesville Memorial Park Cemetery of Waynesville. In lieu of flowers, the family requests memorial contributions be made to Westside Baptist Church Samaritan’s Purse Operation Christmas Child or to St. Jude Children’s Research Hospital and may be left at Memorial Chapels and Crematory of Waynesville / St. Robert.

Naomi June Shelden, daughter of the late Oad Long and Marie (Carroll) Long, was born March 2, 1934, in Waynesville, Missouri where she grew up and attended rural schools and graduated from Waynesville High School. At an early age, Naomi... View Obituary & Service Information

The family of Naomi June Shelden created this Life Tributes page to make it easy to share your memories.