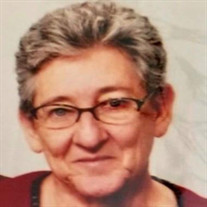 Nina Fay Flores, daughter of the late Claude Edwin and Elvie Christie (Rubottom) Sykes, was born February 3, 1935 in Devol, Oklahoma. As a young girl, she grew up in Devol and Weatherford, Oklahoma and graduated from Weatherford High School with the Class of 1954. Nina attended nursing school and passed the state board exam for RN in 1957 in Clinton, Oklahoma. She worked as a surgical nurse for several different hospitals while in Oklahoma. On December 1, 1959, Nina was united in marriage to Romeo Flores. They shared many wonderful years together before he preceded her in death in 1992. Nina and Romeo were blessed with four children: Ricky, Randy, Christie, and Kathy. In 1969, Nina and the family moved to Texas where she worked as a surgery supervisor, Director of Nurses and Acting Administrator for the Edinburg General Hospital in Edinburg, Texas. While in Edinburg, Nina raised her family and lived there until 1999 when she moved to St. Robert, Missouri to live with her son, Randy, and his wife Miriam. In her spare time, Nina enjoyed polishing rocks, doing ceramics and other crafts. She also liked to go fishing and just enjoyed being out in nature. Most importantly, she loved her family and enjoyed spending time with them as much as possible, especially the grandchildren. Nina passed away Monday, November 30, 2020 in the Silverstone Place of Rolla, Missouri having attained the age of 85 years. She will be sadly missed, but fondly remembered by all those that knew and loved her. Nina leaves to cherish her memory, her children: Ricky R. Flores of St. Robert, MO, Randy Flores (Miriam) of St. Robert, MO, Christie Salazar (Robert) of San Antonio, TX, and Kathy Ramirez (Alex) of Mesa, AZ; four sisters: Letha M. Allen of Odessa, TX, Rita L. Latimer of Pharr, TX, Audry A. Winkler of Mission Viejo, CA and Barbara A. Mullaney of Windsor, CO; seven grandchildren: Robbie, Michael, Ryan, Russell, Romeo, Alejandra, and Alex; seven great grandchildren: Samantha, Robert, Raelynn, Avery, Ashlyn, Redlee, and Ronan; many nieces, nephews, other relatives, and friends. In addition to her parents and husband, Nina was preceded in death by three brothers: Nesbert Baker, John Sykes, and Thomas Sykes; and two sisters: Gladys Patterson and Mary Prikayl. Celebration of Life services were held at 11:00 a.m. Friday, December 18, 2020 in the Memorial Chapels and Crematory of Waynesville / St. Robert with Ben Schumacher officiating. The songs “Wind Beneath My Wings”, “The Garden”, and “Heaven’s Now My Home” were played. Memorial contributions may be made in memory of Nina Flores and may be left at Memorial Chapels and Crematory of Waynesville / St. Robert.

Nina Fay Flores, daughter of the late Claude Edwin and Elvie Christie (Rubottom) Sykes, was born February 3, 1935 in Devol, Oklahoma. As a young girl, she grew up in Devol and Weatherford, Oklahoma and graduated from Weatherford High School... View Obituary & Service Information

The family of Nina Faye Flores created this Life Tributes page to make it easy to share your memories.