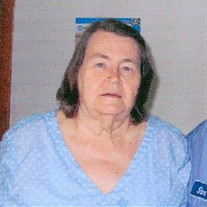 Nina Ellen (Berry) Threlkeld, daughter of the late Clarence Melvin and Eva (Wall) Berry, was born March 25, 1936 in Hanna, Missouri. Nina grew up in Pulaski County and graduated from Richland High School in 1955. Nina met the love of her life when her mom and dad had a well dug. His name was Samuel “Sam” O. Threlkeld. They were united in marriage at the Fairview Baptist Church of Hannah, Missouri on July 20, 1957. They shared over 50 years of marriage together before he preceded Nina in death on February 4, 2008. They were blessed with three children: Larry, Irene and Nancy. Nina and Sam opened their own business, Threlkeld Machine Shop and operated it for many years until Sam’s health began to decline. Nina enjoyed being a stay at home mom and taking care of her family. She enjoyed sewing, knitting and working in her garden. She was an avid St. Louis Cardinal fan and watched every game that she was able. Most importantly, she treasured spending time with her family and friends. As a young girl, Nina made a profession of faith and was baptized. She was a member of the Fairview Baptist Church and attended every time that she was able. Nina passed away Thursday, December 18, 2014 in the Phelps County Regional Medical Center of Rolla, Missouri having attained the age of 78 years, 8 months and 23 days. She will be sadly missed but fondly remembered by all those that knew and loved her. Nina leaves to cherish her memory, her three children: Larry Threlkeld and fiancé Belinda Flaherty of Dixon, MO, Irene Threlkeld of Dixon, MO and Nancy Alkire and husband Ronnie of Dixon, MO; four grandchildren: Rhonda Threlkeld and Ashley, Danelle and Whitney Alkire; two great grandchildren; 2 sisters-in-law: Velma Hatfield and Irene Berry; other relatives and friends. In addition to her parents and husband, Nina was preceded in death by one brother George Berry. Funeral services were held at 1:00 p.m. Monday, December 22, 2014 in the Memorial Chapels and Crematory of Waynesville / St. Robert with Pastor Robert Gifford officiating. The song “In the Garden” was played. Serving as escorts were Jenning Lesher, Gregg Stockdale, Butch Gray, John Kenny, Thomas Stilson and Ron Alkire. Serving as honorary escorts were Charlie and Tracie Storie and Bill Holland. Burial followed in the Fairview Cemetery of Laquey, Missouri. Memorial contributions may be made in memory of Nina Threlkeld to the Fairview Cemetery Fund and may be left at the funeral home.

The family of Nina Ellen (Berry) Threlkeld created this Life Tributes page to make it easy to share your memories.