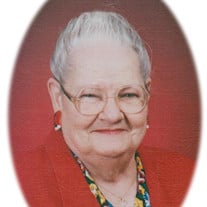 Noma Carter, daughter of the late Hosea and Myrtle (McGinnis) Long, was born May 6, 1930 in Swifton, Arkansas. On May 22, 1948, Noma was united in marriage to Paul J. Carter in Piggott, Arkansas. They shared over 52 years of marriage together and many wonderful memories. Paul preceded her in death on December 6, 2000. Due to Paul being in the military, they were stationed at different places and one of those was in Lee Hall, Virginia. It was during this time that Noma and Paul made a profession of faith in August 1959 at Lee Hall Baptist Church. From that point on, Paul and Noma were very involved in any church that they were a part of. In 1977, Noma and Paul came to Fort Leonard Wood and they joined the First Baptist Church of Waynesville where they were very active. Noma was also very involved in her community with the Red Cross Blood Drives which she helped with for over 40 years, of which she was very proud of. She loved to help people and after Paul’s passing, she would drive people to doctor’s appointments and was a part of the Singles group with the Pulaski County Baptist Association. She was also involved with WMU with First Baptist Church and also helped in the kitchen for funeral dinners and any other occasion involving the kitchen. She was a wonderful cook and loved to spend time with her family. Noma went home to be with her Lord Wednesday, February 8, 2017 in her home having attained the age of 86 years. She was dearly loved and will be sadly missed by all those that knew and loved her. Noma leaves to cherish her memory, two sisters: Charlena Goff of Pangburn, AR and Lucille Ruth of The Villages, FL; several nieces, nephews, other relatives and friends. In addition to her parents and husband, Noma was preceded in death by six siblings: John Long, Talbert Long, Leta Hudson, Vera Nelson, Hosea Long Jr., and Roy Long. Services were held at 11:00 a.m. Tuesday, February 14, 2017 in the First Baptist Church of Waynesville with Pastor Dr. Dennis Crowder officiating. Pianist Becky Lercher accompanied the congregation as they sang “Amazing Grace” and “I’ll Fly Away”. Serving as escorts were family and friends. Burial followed in the Missouri Veterans Cemetery of Springfield, Missouri. Services were under the direction of Memorial Chapels and Crematory of Waynesville / St. Robert. Memorial contributions may be made in memory of Noma Carter to the First Baptist Church of Waynesville and may be left at the funeral home.

Noma Carter, daughter of the late Hosea and Myrtle (McGinnis) Long, was born May 6, 1930 in Swifton, Arkansas. On May 22, 1948, Noma was united in marriage to Paul J. Carter in Piggott, Arkansas. They shared over 52 years of marriage... View Obituary & Service Information

The family of Noma Carter created this Life Tributes page to make it easy to share your memories.

Noma Carter, daughter of the late Hosea and Myrtle (McGinnis)...