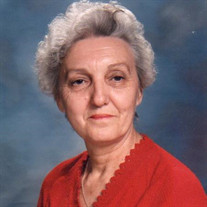 Norma Hancock of Richland passed away Friday, April 28, 2017, at The Bluffs Nursing Home in Columbia, Missouri. She was 85 years old. Norma was born March 24, 1932 in Stockton, California, the daughter of Ludwig and Katherina (Feigert) Schmidt. Norma grew up in northern California and Oregon, the youngest of five children. Her much older siblings nicknamed her “Chickie” because she was so tiny, and that family nickname stuck with her throughout her life. Norma married Mert Hancock on July 8, 1959 and they lived in the By Area of California for many years before moving to Mert’s childhood home of Pulaski County, Missouri in 1977. In her retirement, she enjoyed babysitting her great-granddaughters when they were little and later attending many of their school and athletic events at Southern Boone Schools in Ashland, Missouri. In recent years, she enjoyed watching television, cuddling with her sweet kitty, attending Red Hat Society events with her daughter Eileen and daughter-in-law Marie, and going on weekend trips to Walmart and a restaurant with Eileen and her son-in-law Dave. She would proudly tell anyone who would listen, “Dave takes care of me; I go wherever he goes.” She was a long time member of Faith Evangelical Lutheran Church in St. Robert. Norma was preceded in death by her husband Mert Hancock, son Patrick Tommie of Waynesville, and three siblings Edmund Schmidt, Lillian Partidos, and Lorraine Letcher, all of California. Survivors include her daughter and son-in-law Eileen and Dave Aldridge of Richland, granddaughter Crystal Gateley and husband Curt of Ashland, two great-granddaughters Katrina and Lauren Gateley of Ashland, daughter-in-law, Marie Tommie of Waynesville and one sister Matilda Watso of Santa Maria, California. Services were held at 2:00 p.m., Monday, May 1, 2017 in the Memorial Chapel of Richland with Pastor Danny Graves officiating. Favorite hymns included “Amazing Grace” and “The Old Rugged Cross.” Serving as escorts were Dave Aldridge, Curt Gateley, Danny Graves and Dennis Hultman. Burial followed in the Fairview Cemetery near Laquey, Missouri. Services were under the direction of Memorial Chapel of Richland. Memorial contributions may be made in memory of Norma Hancock and may be left at the Memorial Chapel of Richland funeral home. Online condolences can be sent at www.memorialchapelsandcrematory.com

Norma Hancock of Richland passed away Friday, April 28, 2017, at The Bluffs Nursing Home in Columbia, Missouri. She was 85 years old. Norma was born March 24, 1932 in Stockton, California, the daughter of Ludwig and Katherina (Feigert) Schmidt.... View Obituary & Service Information

The family of Norma Hancock created this Life Tributes page to make it easy to share your memories.