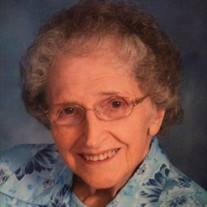 Norma Rosalynn Noe, daughter of the late Thomas Norman and Velma Oneita (Davenport) Hawkins, was born February 16, 1929 in Hazelgreen, Missouri where she grew up. She graduated from Richland High School with the Class of 1946. Shortly after graduation, Norma began working for Pulaski County Bank and Dustin’s Drug Store in Richland. Norma was united in marriage to Kenneth Eugene Noe on August 29, 1947 in Hazelgreen, Missouri. They were blessed with three children: Rosalynn, Janice and Marvin Delaine and shared over fifteen years of marriage together before Kenneth preceded her in death on July 18, 1963. Her son, Marvin, passed away as an infant. Due to Kenneth working for Shell Pipeline, Norma and the family moved to several locations depending on where Kenneth was transferred. They lived in Missouri, Oklahoma, South Dakota and Wyoming. While in Wyoming, Kenneth passed away, and then Norma brought the family back to Richland. After moving back to Richland, Norma began working as the secretary to the Richland High School principal. She worked under three different principals during her 31 ½ years of service….Bill Halter, Robert Jenkins, and Terry Evans. She saw the school go through many changes including working in both the old and new high school buildings. After her retirement from the school, Norma was able to do more of the things that she enjoyed. She loved to go shopping, go to basketball games, travel with family and friends and go to the Warren Senior Center to play bingo, dominos and have fellowship with her friends. Many people have commented Norma always seemed to have a smile on her face. Norma was very involved in her church, Richland United Methodist Church. She loved to sing in the church choir and was active in the church ladies group. Norma was also a member of the Eastern Star and Business and Professional Women’s Club. In 1979, Norma was chosen “Woman of the Year” by the BPW. The one thing that brought more joy to Norma than anything else was spending time with her family. She loved her family deeply and loved spending every minute she could with them. Norma passed away Saturday, May 20, 2017, in Richland Care Center having attained the age of 88 years. The family extends their gratitude to those who helped care for Norma during her stay at Richland Care Center. Norma leaves to cherish her memory, her two loving daughters: Rosalynn York (Kenneth) of Richland, MO and Janice Walters (Ronnie) of Richland, MO; three grandchildren: Kyle York (Olivia) of Stoutland, MO, Elaine Cole (Jesse) of Richland, MO, and Justin Walters (Lindsay) of Richland, MO; six great-grandchildren: Madelyn, Katelyn, Lilly, Kylie, Allie, and Miya; a number of nieces and nephews; as well as a host of other relatives and friends. Norma was a wonderful daughter, wife, mother, grandmother, sister and friend. She was a faithful witness for Christ who lived her life with a loving spirit and sweet smile. She will be missed greatly, but her memory will live on in our hearts forever. Services were held at 11:00 a.m. Wednesday, May 24, 2017 in the Richland United Methodist Church of Richland, Missouri with Pastor Mitch Henson officiating. Pastor Henson also sang “Amazing Grace, My Chains Are Gone” and Merlene Smith sang “It Is Well With My Soul”. Serving as escorts were Ken York, Justin Walters, Ronnie Walters, Jesse Cole, Kyle York and Jerry Jennings. Serving as honorary escorts were Bob Shockley, Junior Homan and Bob Groat. Burial followed in the Oaklawn Cemetery of Richland, Missouri. Services were under the direction of Memorial Chapel of Richland. Memorial contributions may be made in memory of Norma Noe to the Richland United Methodist Church or the Warren Senior Center and may be left at the funeral home.

Norma Rosalynn Noe, daughter of the late Thomas Norman and Velma Oneita (Davenport) Hawkins, was born February 16, 1929 in Hazelgreen, Missouri where she grew up. She graduated from Richland High School with the Class of 1946. Shortly after... View Obituary & Service Information

The family of Norma Rosalynn Noe created this Life Tributes page to make it easy to share your memories.