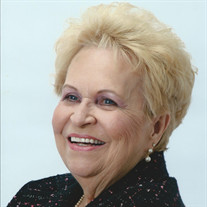 Nyda Marie (Bench) Dunn Wells was born on June 30, 1927 in Sapulpa, OK and passed away on June 10, 2016 in Springfield, MO at the age of 88 years, 11 months and 10 days. She was the oldest child of Ralph Bench and Velma (Freeman) Bench. She was preceded in death by her husband, Robert E Dunn of 15 years and her husband, Harold L Wells of 47 years, in addition to a sister, Barbara (Dunn) Robinson. Nyda is survived by two brothers, Larry Bench and Charlie (Joan) Bench of Waynesville, MO and one sister, Judy (Bench) Granger of Kennett, MO. She is also survived by her children, Nancy Ann Dunn of Springfield, MO, Bob (Sue Ann) Dunn of Devils Elbow, MO, Tricia (Eric) Headley of Springfield, MO, Tom (Faith) Dunn of Devils Elbow, MO, Tim (Laurie) Dunn of Rolla, MO, Susan Dunn of Colombia, South America, and Andrew (Tara) Wells of Springfield, MO. She has 17 grandchildren, Joshua O’Riley, Robbie Rick, Brady Rick, Travis (Kristin) Dunn, Lucas Dunn, Derek Dunn, Aaron (Ali) Headley, Makenna Headley, Mia Headley, Meisi Headley, Melanie (Michael) Burns, Patrick Dunn, Kirsten Dunn, Kolbi Dunn, Corey Dunn, Eli Wells and Isaac Wells and 5 great grandchildren, Molly Dunn, Gracie Dunn, Soren Blamey, Pipper McGuire and Joselyn McGuire. She spent most of her childhood in Oklahoma. Her family moved to Missouri in 1941 when her father got a job in construction building Ft. Leonard Wood. After graduation from Waynesville High School in 1945, Nyda moved with her sister Barbara to St. Louis, MO and worked at Ralston Purina until meeting her husband Robert who was recently returned from serving his country as a Marine in WWII. Nyda and Robert married in 1948 and lived in St. Louis and later Cahokia, IL. Together they had six children and tragically Robert died at the young age of 44 leaving Nyda a young widow. Nyda and her children moved to Waynesville, MO where her parents and brothers lived. She worked at Waynesville School System and Ramada Inn where she met Harold Wells. They married in 1967 and to that union was born one son. Harold and Nyda moved to Devils Elbow and lived many years in the Waynesville area, owning several businesses together. Nyda especially enjoyed the years she owned a green house in St. Robert and loved socializing with all of her customers and friends. Nyda also was a beloved grandmother and cared for several of her grandchildren over the years. In 2008 Harold and Nyda retired to Springfield, MO where they lived out their remaining years together. Some of Nyda’s happiest times in life were spent dancing, listening to Big Band music, gardening, reading, watching old movies, making friends, and enjoying her family time. She and Harold were members of the Hickory Hills Baptist Church in St. Robert, MO. Nyda was known for her outgoing personality and she never met a stranger. She was a kind hearted and loving mother, grandmother, great grandmother and friend who will be greatly missed. Arrangements are under the direction of Waynesville Memorial Chapel, Waynesville, MO with Reverend Philip Wright officiating. Visitation will be at Waynesville Memorial Chapel on Tuesday, June 14 from 12:00 – 2:00 p.m. with funeral services immediately following. Interment will be at the Waynesville Memorial Cemetery.

The family of Nyda Marie (Bench) Dunn Wells created this Life Tributes page to make it easy to share your memories.