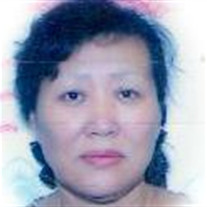 Oe S. Noel, daughter of Bo Moon Sung and Pil Sun Lee, was born May 2, 1955 in Seoul, South Korea where she grew up and attended Seoul, South Korea Public School System. On September 17, 1989, Oe was united in marriage to Joseph Nathaniel Noel, Jr. in Rolla, Missouri. They shared over 26 years of marriage together and two families were blended. Oe was a hardworking woman and worked in housekeeping on Fort Leonard Wood for 11 years. Most of her working years, she was able to stay at home and take care of her family. Oe loved to cook for her family and friends and enjoyed spending time with them. Oe passed away Sunday, April 10, 2016 in the Barnes Jewish Hospital of St. Louis, Missouri having attained the age of 60 years. She will be sadly missed, but fondly remembered by all those that knew and loved her. Oe leaves to cherish her memory, her husband: Joseph Noel of St. Robert, MO; daughter: Mary Eloise Thomas of Detroit, MI; stepdaughter: Shelly Noel Brown (Clay) of Mobile, AL; grandchildren: Barcleigh Brown of Mobile, AL, Kierra Brown of Raleigh, NC, Rayshawn Griffin, Jalen Thomas and Dyeon McIntyre, Jr., all of Detroit, MI; her mother: Pil Sun, Lee of Seoul, South Korea; one brother: Jo Hun, Sung of Seoul, South Korea; brother and sister-in-law: Donald Noel (Chong C. Noel) of Harker Heights, TX; other relatives and friends. Oe was preceded in death by her father, Bo Moon Sung. Services were held at 1:00 p.m. Saturday, April 16, 2016 in the Memorial Chapels and Crematory of Waynesville / St. Robert with Pastor Cheong Soo Gap officiating. The songs “Amazing Grace” and “Don’t Cry for Me” were played. Private burial was held in the Missouri Veterans Cemetery of Waynesville. Memorial contributions may be made in memory of Oe S. Noel and may be left at the funeral home.

The family of Oe S. Noel created this Life Tributes page to make it easy to share your memories.